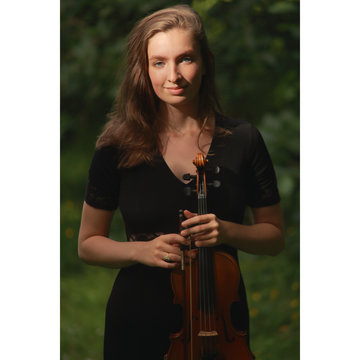 Classically trained but fuelled by new sounds! Up for anything, able to play trad, pop, jazz or classical!
3 of 7 photos
Violinist
Glasgow
Public liability insurance of £10 million

Rachel Culpan is a Glasgow based violinist and pianist. An emerging young artist, she continues to hone her skills currently studying at RCS. Through her intrinsic musicianship, her expression is boundless. She has an ability to enthral audiences with her performances, an exhibit of the joy music brings her. In 2018 Rachel experienced great success. Winner of the WSSO leader competition, she led the orchestra for the 2018 season, playing in the Glasgow Royal Concert Hall and the Glasgow City Halls with repertoire including Rachmaninoff Symphony 2, working with James Lowe. She also played with NYOS Symphony orchestra, playing at venues such at the George square for the European Championships, Usher hall and Caird hall. The repertoire for the season included Stravinsky’s the Rite of Spring and Debussy’s La Mer conducted by Rebecca Miller and Paul Daniel. Further orchestral experience included working with Natalia Luis Bassa within the Junior RCS Symphony orchestra. In 2017, she was runner up for for the new piano stars competition, playing Schubert impromptu op.90 no.4. Rachel is an innovative young musician, always open to new experiences and ideas. She is passionate about all genres of music and although specialising in classical, loves to experiment with new things, often playing with traditional musicians as well as classical. She also sings and has been involved in choirs, in 2017 singing as part of a BBC Christmas eve broadcast with the RCS juniors chamber choir.

Yes, I can also offer a duo with violin/cello, piano/cello or string quartet.

I can be as flexible as possible, as long as I am aware of any changes I will accommodate to the best of my ability.

Depending on the line up I would only need around half an hour to an hour. I would just require some time to tune, get a feel for the acoustics and have a warm up.

Of course! I am willing to learn pieces specifically for your event, chosen by you. Either you can pick from my list or give me an idea of the kind of genre/pick certain songs or pieces.

Yes, I bring my own instrument to play acoustically, along with a music stand if required.

Yes! I would need to know in advance ideally, but there is a chance I would know the piece already! If I was playing in a group situation I would request that any pieces that aren't on the list are requested a bit further in advance as rehearsal time would be required.

Standard Prices
All prices include:Consultation either phone/zoom or in person, some of your own choices for pieces on the day and order.
NEW!Virtual services
Personalised Music Message
Book me to create a unique music video for you to send to a friend as a gift. This could be a birthday message, first dance song for a wedding anniversary, or just your friend's favourite song to cheer them up.
£15

'Her interaction in group work was fantastic and her contributions both full of imagination and understanding of the stylistic idioms of the music. She worked with a group to produce their own arrangements of melodies we gave them and came up with interesting and exciting arrangements. Her playing was rich and expressive and she jumped at the chance to improvise.'

'Rachel and Ayla (cello) played an array of different styles of music, ranging from classical to pop. They really gave the day a special feel!'