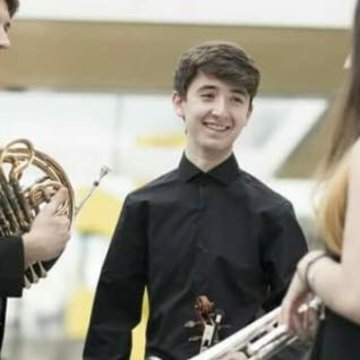 Alex Raine is a violinist based in London
Violinist
Durham

British violinist, Alex Raine, began learning the violin at the age of 4. Since then, he has performed as a soloist, chamber musician and orchestral player across the U.K, and currently studies at the Royal College of Music under the guidance of Maciej Rakowski. He has further received masterclasses from eminent artists such as Michal Cwizewicz, Stanislav Pronin, Sasha Rozhdestvenskiy and Mark Messenger, among others. At the age of 9, Alex earned a place in the National Children’s Orchestra of Great Britain where he was a member for 4 years and led one of their orchestras. With the NCO, Alex was fortunate to be given the role of Jascha Heifetz in the National Theatre’s production Travelling Light and to collaborate with the European Union Youth Orchestra. He was later a member of the National Youth Orchestra where he held important positions such as Principal Second Violin in some of their projects. With the NYO, a series of exciting years followed where Alex performed at the BBC Proms and the Berlioz Festival 2017, as part of their tour of France. He also had the opportunity to collaborate with world-leading artists, such as Sir Mark Elder, John Wilson, Edward Gardner, Kristjan Järvi, and Sir George Benjamin, among others. Alex previously studied at the Junior Royal Northern College of Music where he discovered his passion for chamber music. He was in a string quartet for 5 years which performed extensively in the college’s showcases and concerts.

‘The National Youth Orchestra of Great Britain describes itself as "the world’s greatest orchestra of teenagers”. And I’m not going to dispute the label, especially after this dashing concert, conducted with bright eyes and incisive gestures by Nicholas Collon, a former NYO player himself. To judge from those powerfully sorrowing lower strings at the start of Tchaikovsky’s Hamlet overture, these teenagers had already been through life’s wringer. Maturity also roared from the brass, whose venomous harmonies landed like boxers’ knockout blows. If all 2016’s musical Shakespeare throbs like this, we’re in for a blistering year.’ - The Times, 4 stars

And, boy, did NYO play well: virtuosic, concentrated and seriously impressive” ★★★★ The Times