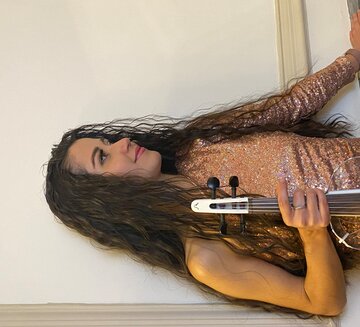 Nadia Vasileva grew up studying violin at Chetham’s School of Music for eight years before going on to receive a place at the Royal College of Music where she graduated with her Bachelor of Music degree, studying with Prof Radu Blidar. Nadia has performed as a soloist in recitals across the country and participated in masterclasses with the likes of Alf Richard Kraggerud, Pavel Fischer and Thomas Zehetmair. Orchestrally, Nadia has performed in an extensive number of venues including Buckingham Palace, Kensington Palace, The Royal Festival Hall, Cadogan Hall, The Cheltenham Festival and The Bridgewater Hall with the position of concertmaster of Chetham’s Symphony Orchestra and Valdres Sommersynfonie. She has also played as part of a chamber group at Kensington Palace and recorded at Abbey Road Studios. Nadia has lots of performance experience and frequently plays as a soloist or as part of a chamber group at many events. Nadia recently participated in the Britten-Pears Young Artist Programme and featured on the channels of Halidon Music and Classic FM.

LF
Luke F
3 years ago, for a Recording session in 69 Brook Street

Lovely violinist, great to work with!

Not just another concert, exquisite playing!