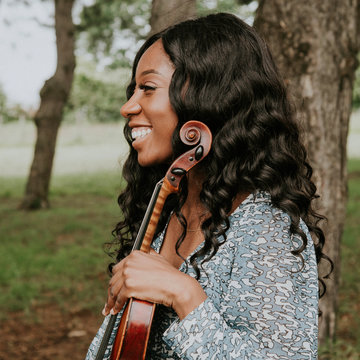 An award-winning, experienced and versatile musician able to perform and arrange music, Mahaliah is a violinist based in Surrey, UK.
3 of 16 photos
Violinist
Surrey
Public liability insurance of £10 million
Verified profile

Mahaliah is a violinist from Nottingham based in Surrey. Mahaliah is a violinist, educator and workshop facilitator based in Surrey, UK. A versatile musician, she has performed in diverse venues from the Queen Elizabeth Hall, Southbank Centre to Winchester Cathedral, Cecil Sharpe House, Wembley Arena and at festivals including Kendal Calling, Sidmouth Folk Festival and Towersey Festival. She attributes her versatility to her formal training at both the Royal Birmingham Conservatoire and the Purcell School for Young Musicians and also her upbringing in a musically vibrant pentecostal church. Mahaliah is a founder member of the Dunev Quartet, a string quartet based in Birmingham and enjoys a versatile career of freelance performing and arranging. She performs music of diverse origins ranging from Gospel to Reggae and Afrobeats to Electronic. She has also worked, performed and collaborated with artists such as British Composer Errollyn Wallen, Grammy Award-winning percussionist Lekan Babalola and Haitian-American singer-songwriter and violinist Germa Adan. For three years she was a violinist in Joe Broughton's Folk Ensemble. ​ In 2013, Mahaliah was awarded a full scholarship to study at the Purcell School for Young Musicians where she studied violin with Alda Dizdari, jazz piano with David Gordon and classical piano with Caterina Grewe. She has played in masterclasses for Jamie Campbell, Tamsin Waley-Cohen, Oliver Wille, Ben Sayevich and Ayke Agus. From 2015-2019, Mahaliah was an undergraduate scholar at the Royal Birmingham Conservatoire where she studied under Susanne Stanzeleit. During her studies, Mahaliah has played under the baton of Sir Barry Wordsworth, Sir Richard Armstrong, Stephen Bell and Michael Seal. She has performed in a range of concerts and events from showcase symphony orchestra concerts at THSH to primary school concerts with Sir Lenny Henry. With the Dunev Quartet, Mahaliah has received coaching from a variety ensembles namely the Chilingirian Quartet, Gildas Quartet, the Heath Quartet and Kuss Quartet. The Dunev Quartet also received coaching and close mentorship from Robin Ireland, Rose Redgrave, Lucy Nolan and Charlotte Bonneton of the Castalian Quartet. ​ Mahaliah plays a 19th century violin by Honoré Derazey on generous loan.

Everyone attending really enjoyed the musicians; their presentation and their playing, What a joy for people with dementia who would otherwise never get to hear classical music live. Music reaches the spirituality and soul of people who can no longer communicate in everyday speech. Now if only the musicians had the time to spend about half an hour after their performance or before to talk to residents and relatives; elderly people really love to share the enthusiasm and emotions of young vibrant people; maybe to hold their hand or touch that special instrument/ guitar/ cello...........please convey this to your lovely young quartet

What an amazing violinist!

Mae and her quartet were the perfect choice for our wedding. They played all the music we wanted and made the process of booking, set up and performance very easy, helping the day go smoothly. We highly recommend Mae!

Her knowledge of genres is very impressive and her ability to make classical music sound contemporary and current music sound timeless creatively demonstrated our vision. Mahaliah is hard working, professional and able to break those preconceived ideas of music. She captured the moment so perfectly and made our day magical. It was an honour to have her play at our wedding; a memory that I will cherish for the rest of my life.

She played her violin effortlessly and with such invigorating passion and grace. It was truly beautiful to watch.

Engaging and warm playing as always.