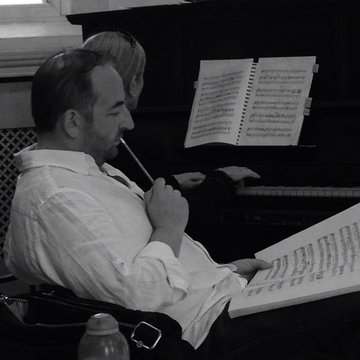 Versatile Violinist based in Scotland with experience in all genres of music with a huge selection of music to suit every event.
Violinist
Dollar

David graduated from the Royal Northern College of Music in Manchester in 1998. He went on to play professionally for many of the leading orchestras in the UK including the Halle, Royal Liverpool Philharmonic Orchestra, Manchester Camerata, Manchester Concert Orchestra and the Performing Arts Symphony Orchestra. He manages the Christie String Quartet playing for weddings and events. He is a versatile musician performing for some of the large scale musicals such as Cameron McIntosh Les Miserables, Phantom of the Opera, Oliver, My Fair Lady and Disney's Beauty and The Beast. He is an experienced Musical Director conducting and producing over 40 musicals. Last year he launched the Scottish Pops Orchestra performing at the Glamis Castle Proms with Susan Boyle, Lee Mead, Jai McDowell and the Soul Nation Choir.

David was very professional and took time out to speak with us. I was very happy with the experience and the beautiful music choices were perfect for the day.

TM
Tim M
3 years ago, for a Wedding in The Yair

Dear Morag & Marcus, Steve and I wanted to write to say a massive thank you for the brilliant music that you provided for our wedding at The Yair on 29th June (2019). You helped to make a special day for us both even more magical than we had ever hoped. The quartet provided the perfect backdrop as our guests gathered and everyone was blown away with the two pieces that Marcus (Marcus Swietlicki Tenor) performed…..I then got to hear some of the quartet which was just beautiful…. Thank you both for your important part in creating what was a truly amazing day for us. Everything worked perfectly and there was such a feeling of love and happiness it was overwhelming. The whole event ended up far exceeding all our hopes and expectations. Thank you so very muc. Tim & Steve.

SB
Shanna B
4 years ago, for a Wedding in Glencarse

Morag, I’m so sorry I didn’t get a chance to come up and introduce myself! Thank yous all very much, my guests said the music was perfect!! Once I receive the photographers photos I will be sure to leave a review :) Regards Shanna ‘Ball’