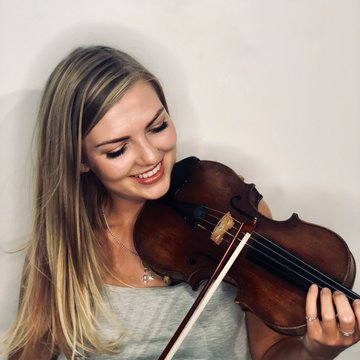 Hi I'm a freelance violinist based in Surrey UK. I work mostly in London and also around the world as a soloist as well as part of orchestras. I also play as a session musician and in musical theatre, most recently in London's West End as part of the orchestra for 'A Christmas Carol'. I have played in venues such as the Royal Albert Hall, London Palladium and Cadogan Hall. I run the string ensemble 'Vibellos String Collective' (also on encore!) and perform solo electric violin at large functions for high end clients such as Bentley. I’ve played this style at The Shard and London Cabaret Club. I can also do this as part of a DJ live set up where I improvise over a DJ at wedding parties or large corporate functions. As a soloist I play a large range of styles including: classical, pop, jazz, love songs, Disney, musicals and RnB. Anything you want that has a melody, I can play! So don't be afraid to ask or requests, I'm always more than happy to be led by you on song choice. For weddings, I usually play as part of the ceremony, reception or evening meal. Again, any style of music is available to you and you can choose from my classical acoustic violin or my white jewelled electric violin! I bring a small PA system which plays backing tracks and amplifies the violin too. I play as part of a Jewish function band and also play solo authentic Jewish music during ceremonies and can offer lounge sets over dinner. I'm also comfortable in front of a camera having done a lot of promo video shoots a few of which you can find on my media page here.

For functions, parties and weddings, my set lists are totally bespoke. I like to tailor the music to you. You can suggest a genre or style or you can request specific songs. A few of the genres I regularly play are:
Modern pop
Love songs
Jazz
Classical
Dance/Club
Bollywood
Disney
Jewish
Please let me know your requests and I will be able to sort them out for you!
Customer questions

Yes, I can provide a string duo, trio or quartet from my other page on Encore 'Vibellos String Collective'

I always try and be flexible with this as much as I can. If it's a significant amount more playing then we can look again as costs, but if its a simple change of time just let me know and I'll do my best to accommodate it! I'm always happy to talk through things like this!

Maximum an hour, it's only a small PA system!

Absolutely, I love to be guided by you on song choice. Every set list I make is personal to you! You can either request songs or you can tell me your general style or the mood you want to create and I can make playlists based on your tastes. If you want specific songs, of course you're welcome to request them with enough notice!

Yes I bring two small speakers and a mixing desk to play my backing tracks and amplify my violin if necessary. I can also plug into another system if there is already one at the venue, can share with the DJ usually if they're ok with it!

Yes absolutely as long as you give me enough notice, 1 month in advance at least!

Standard Prices
All prices include:PA equipment and your choice of electric or acoustic violin.

Verified
Reianna A, 1 year ago

Corey was absolutely amazing and accommodated to everything! Was a great addition to the event and made it extra special. Really friendly and great communication. Couldn’t have asked for a better experience! Thank you!!!

Corey was amazing. She knew exactly what we wanted and did not disappoint. Corey started by playing at our civil ceremony and then went into playing at our reception and our guests were beyond impressed. She created the perfect ambience for our reception! We picked Corey based on her you tube show reels... please be aware that although these are great they do not give her justice, her live performances are something else. We would definitely book Corey again and recommend her!! Beejal & Nirav

Verified
Pratik A, 3 years ago

Corey was an absolute star! Her performance was amazing for my wedding, for the offset was engaged and provided great support from suggesting songs to providing a sample. Corey was professional and I would recommend using her work. (PS she sings too!)

Corey is an outstanding performer! I couldn’t believe my eyes or ears when I looked up at the stage and saw Corey performing in the early hours of the morning at our charity relay. Having just walked throughout the night and feeling a bit exhausted and sore, listening to her music uplifted my spirits and allowed me to shake away my exhaustion. Her positive presence and current song choices transported a new and enlightened way of listening to the violin. It was one of my highlights of the whole event!

Verified
Daniel B, 2 years ago

We first saw Corey play at a friends wedding and we instantly knew we wanted her playing at ours (which was 2 years down the line at that point). Now it's after our wedding we couldn't be happier with the addition of Corey to our afternoon/evening cross over. Corey's set was modern, upbeat and really well received by all of our guests. We had requests from several of our guests about hiring Corey as they're planning their wedding ceremonies and her performance really makes the whole atmosphere, we couldn't imagine the day without her now. She is a delight to deal with and I would 100% recommend her to anyone getting married, indeed we have already! Thank you Corey, you helped shape our day and it was perfect!

These guys played at our charity ball. We had 250 people in attendance and almost everyone was up on the floor while these guys were playing. There mixture of 60's music and more modern indie rock and pop suited the whole crowd and appealed to everyone! They were extremely professional to deal with and were quick in their responses. They are completely self sufficient and brought their own PA system which saved us having to pay to hire any equipment (always good for a charity function!) I would highly recommend these guys, they're full of life and know how to get a party going!

Luke and the Locomotives are superb. We had them at our wedding, they brought a whole stage set up and huge PA system, it was a fantastic! Perfect for a massive party, we had age range of 4-80 and everyone had to chance to have a boogie to their favourite songs. They played a few special requests for us which we loved and they had everyone up and singing along. So lovely to have such a young, fresh and professional band entertaining at our wedding. It really made the evening so special! Thank you all.