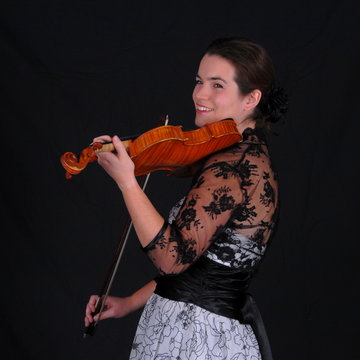 Clare is a freelance violinist working in & around the South East of England, performing with numerous orchestras, her string quartet & duo.
Violinist
Woking
Public liability insurance of £10 million
Verified profile

Clare enjoys a busy freelance career working with orchestras such as Welsh National Opera, The BBC Concert Orchestra, Royal Philharmonic Orchestra, Bournemouth Symphony Orchestra, European Union Chamber Orchestra, The Mozart Festival Orchestra, Brittish Sinfonietta & Southbank Sinfonia. She has also worked at The National Theatre performing Jonathan Miller’s production of Bach’s St. Matthew Passion and Stoppard and Previn’s play for actors and orchestra, Every Good Boy Deserves Favour. As an orchestral musician she has recorded three CDs and been broadcast on Radio 3 and Classic FM. She has worked as a session musician on many soundtracks including the BBC's 'Wonders of the Universe', 'The Secret Agent', 'Thirteen', 'Dr Foster', 'The Woman in White', 'Little Women' and for ITV's 'Safe House' and 'Inspector George Gently'. She has also performed on numerous broadcasts for BBC 'Friday Night is Music Night' and Radio 3's 'In Tune' programme. Clare read music at Christ Church, Oxford where she won an instrumental exhibition, was awarded the Clifford-Smith Prize and attained a first class degree. Afterwards she gained her Postgraduate Diploma with Distinction at Trinity College of Music. Clare enjoys chamber music, recently performing Schubert’s Octet at The Royal Opera House recital series. She plays with The Dovetail Quartet and the recently formed String and Tonic, performing on cruise liners all over the world and giving recitals in and around London. As a soloist, Clare has recently performed Brahms' Double Concerto with Jo Keithley and the North London Sinfonia. She also played Vaughan Williams The Lark Ascending, Mozart’s Sinfonia Concertante and Mendelssohn’s Violin Concerto with the Haydon Chamber Orchestra. She was also broadcast live on Radio 3 performing solo violin with Christ Church Cathedral Choir.

Clare was great! A fantastic player who blended in well with our band in my absence.

‘I just want you to know that we very much appreciated your playing. A number of my guests said to me how lovely it was to have musicians to accompany the tea – better than the Ritz was one comment! Many thanks for your contribution to my special day.’