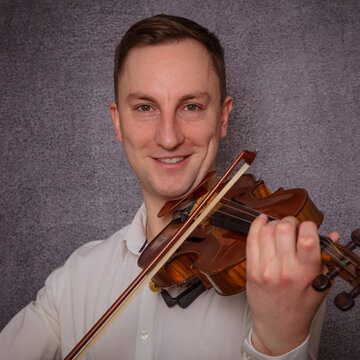 Carl is a violinist from Eastbourne. He studied in London at Trinity Laban and now performs and teaches around Sussex and London
3 of 6 photos
Violinist
Eastbourne
Public liability insurance of £10 million

Carl is an English violinist based in the seaside town of Eastbourne. He is a teacher and freelance performer around East Sussex and London. Carl began playing violin age seven and his musical interest has continued to flourish ever since. Before accepting a place at Trinity Laban in 2010 to study with Professor Diana Cummings, he studied at the East Sussex Academy of Music in Lewes, where he was leader of the ESAM Orchestra. As a soloist, he gained 2nd place with Highly Commended in the Vivian Joseph Classical Concerto Competition 2014 performing Mozart Concerto no.2 in D major and has also been a finalist in the Vera Kantrovich Solo Bach Prize. He has performed at renowned venues such as The Royal Albert Hall, Royal Festival Hall and a concert at Queen Elizabeth Hall as part of Trinity Laban’s String Ensemble. Chamber music is a passion of his and plays in a violin/piano duo, a clarinet trio and is a member of the Mizuki String Quartet, who have received coaching from esteemed musicians such as the Carducci and Wihan quartets, Michael Bochmann and David Kenedy. Carl graduated from Trinity in July 2014 with a BMus degree in violin performance. In addition to this, his keen interest in teaching violin has enabled him to gain a Licentiate of Trinity College London level 6 teaching diploma which was a specialist option of his at Trinity. Carl has a keen interest in teaching violin to all age ranges and abilities. Asides from music, Carl enjoys playing tennis, walking in the countryside and cooking. Violin Teaching Carl currently teaches individual and group lessons at a Saturday Music School in Wembley and at a school in East Sussex as well as privately in London and East Sussex. He teaches pupils of various ages and abilities, beginners to advanced. Carl is a keen and devoted violin teacher and has recently gained an LTCL teaching diploma as well as his BMus degree on violin at Trinity. He strives to get the very best out of his pupils and effectively varies his teaching techniques to suit the pupil’s personality and needs. A main focus is on technique and posture in the early stages of learning to avoid problems in playing later on in life. This is achieved in a creative way, however, musicality and enjoyment of playing the violin remains the most important aspect overall. Carl teaches pupil’s who wish to learn for fun, or to develop their skills using violin exams as a way of measuring success. Preferably the ABRSM exam syllabus is used, or Trinity Guildhall is another option. Carl has a 100% pass rate of all his pupil’s who have taken exams, grade 1-8. Teaching resources/approaches regularly used: Suzuki violin school books, ABRSM grade books, “Fiddle Time” series of beginner violin books, Dalcroze Eurhythmics ( introducing concepts of rhythm, structure, and musical expression through movement.) DBS – Disclosure & Barring Service, formerly CRB check: Carl has a current DBS disclosure through the Incorporated Society of Musicians.

I also play with my violin duo partner Karina, in Strings Attached.

Yes, we are able to bring all our own equipment to perform acoustically or amplified.

If a song isn't included in our song list there may still be a chance we already know it. If there is a special song you'd like us to learn we are happy to do this for you. There is a fee of £20 for this service to take into account rehearsal times etc.

Ability to perform in a large variety of styles with or without backing tracks.

Carl has performed most recently for Princess Cruises with his duo partner in Strings Attached. He has also performed around the UK at renowned venues such as The Royal Albert Hall, Royal Festival Hall and St Johns Smith Square.

As part of Strings Attached, violin duo - We are inspired by many different styles of music and love to challenge ourselves in implementing as many as possible in to our violin duo repertoire. Particular artists such as The Beatles, Michael Jackson, Elvis Presley etc we have even dedicated theme sets to.

Standard Prices
All prices include:All equipment necessary for the performance, including PA system when necessary.

Very talented musicians, love their style and choice of music! We have enjoyed their performances throughout the Panama Canal Cruise!

We just had the pleasure of visiting the Panama Canal. We met Carl and Karina of Strings Attached Duo. They are wonderful and their music is absolutely beautiful. I bought the cd and love it.

Our Alaskan Cruise had a lot of wonderful entertainment but Strings Attached was the Best of the Best! I am excited that they have a cd so I can continue to enjoy their music. I have become a Forever Fan!

Just had the pleasure of listening to Strings Attached on our cruise through the Panama Canal. They were outstanding and we would listen to them in the atrium almost every night!!

Fantastic!! Exceptional talent! On our 15 day cruise we watched Strings Attached 12 times. Couldn’t get enough! They played all genres and were very accommodating with requests. We highly recommend taking in their performances. 2 thumbs up, hope to see them again!