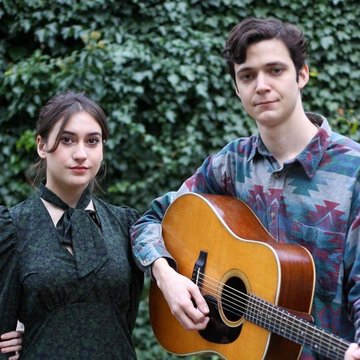 About Annie and Geary

We are Annie and Geary, an up and coming vintage inspired young music duo. We perform an eclectic mix of jazz, folk, and Americana in our signature acoustic style, so that these styles blend seamlessly. We develop pieces from the Great American Songbook with thrilling new arrangements for a solo guitar and vocalist, as well as classic folk songs with vocal harmonies. In addition, we also perform our original work, which demonstrates all of our influences across the retro genres. Since forming in June 2021, we have shared our music at festivals such as Twinwood Vintage Festival, the Rye International Jazz Festival, and venues such as The Arden Theatre, where we were met with rave reviews from the audience for creating an intimate and interactive night of music. Geary Allen’s guitar playing blends the style of Django Reinhardt with Bluegrass artist Doc Watson to create his signature sound. He grew up playing banjo and guitar with members of his family in “The Allen Family Band”, who have played across Europe and at festivals such as La Roche Bluegrass Festival in Switzerland, as well as being featured on The One Show alongside Donny Osmond. Annie Majin’s warm and tender vocals are authentically vintage, her theatrical background taught her to connect with audiences in an emotional sense, and since pursuing a career in music, she has been credited with creating extremely captivating performances, transporting audiences to the 20th century. Get ready for an intimate and relaxed experience watching these two talented musicians.

Examples of our jazz set:
Time After Time
Dream a Little Dream of Me
Coquette
Zing Went the Strings of My Heart
Can’t Help Loving that Man
Ain’t Misbehavin
Easy Livin
On the street where you live
Skylark
Sunny Side of The Street
Examples of our folk and country set:
Wednesday Morning 3am
Folsom Prison Blues
Bottle of Wine
Farewell
Yesterday
Surfer Girl
Bleeker Street
Jambalaya
Tammy
One after 909
Homeward Bound
Miss the Mississippi and you
Don’t think twice it’s alright
Don’t fence me in

Extremely talented duo, Annie has the voice of a 1940’s songstress in a young woman’s body and Geary’s incredible and impressive guitar skills made for an evening of interactive and intimate performance.