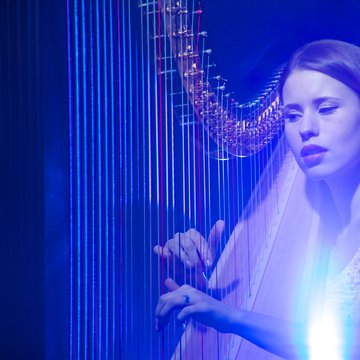 Valeria is an award-winning harpist who has performed solo, chamber music and with orchestras across the world.
3 of 13 photos
Harpist
London
Public liability insurance of £10000000 million
Verified profile

Russian harpist Valeria Kurbatova started her musical career at the age of 8 when she began studying the harp at the Gnessin State Musical College and later Moscow Conservatoire College. She had her debut at the age of nine at the Great Hall of Moscow Conservatoire. Since then Valeria has performed as a soloist and in ensemble groups in numerous concerts, at a vast range of concert halls: The Conservatory’s Concert Halls, Rachmaninov’s Concert Halls, The International House of Music, The Barvikha Concert Hall, and The Gnessin’s Hall. London concert halls and venues she has played include: Wigmore Hall, Victoria and Albert Museum, The Barbican, Royal Albert Hall (Elgar room), Cadogan Hall, The Forge, The National Gallery, The Houses of Parliament, The Natural History Museum. Westroad Hall (Cambridge) and The Royal College of Music Concert Halls. Valeria has won awards at a number of different International harp and music competitions: Scholarships from “New Names Foundation”, “The Young Talent” award from the Spivakov International Foundation, 1st prize at the International Harp Competition in Moscow, Young Talent award at the Moscow Music Festival, 4th prize at the International Cardiff Harp Competition, “Best student of the year” award in 2011 (among all music conservatoires in Russia), finalist of the Croydon Concerto competition followed by “Young Soloist” award and the Jellinek Prize, 1st prize at the Royal College of Music harp competitions in 2012 and 2014. In 2012 Valeria was also selected as a ‘Rising Star’ by The Royal College of Music In 2012 Valeria and her duo partner Luce Zurita (Elegiac Duo) were finalists of the Croydon Concerto Competition 2012 where they performed Mozart flute and harp concerto with the Croydon Symphony Orchestra. They have since been appearing as soloists with various orchestras for the past 2 years and played a series of recitals at the Meridiennes Festival in Rouen, France in April 2014. In 2014 they premiered a double-concerto by Richardson dedicated to them and a piece by Andrea di Paolo ‘In Quite for Morton F.’ In 2013 Valeria became the principal harpist of the London Electronic Orchestra founded by Kate Simko. The project has had success since the very first show. This year alone they have played the opening set at the iTunes Festival, Boiler Room in Ibiza, The Forge and at The National Gallery in London. An active chamber musician, Valeria formed Globe Ensemble featuring Luce Zurita (flute), Shiry Rashkovsky (viola) and herself. Next season sees the ensemble tour across the UK and will incorporate music of Romantic, Impressionist and Contemporary styles. Valeria also collaborates in many other different ensembles and projects. Valeria can play alongside a range of different instruments and is available for concerts, private events and promotions.

I've never heard a harpist play with such clarity like this before!

I recently attended Valeria’s recital at the Royal Academy of Arts, where her virtuosity was matched by immaculate presentation!

Dear Valeria Thank you so much for your lovely playing at our reception on Tuesday. Our guests really enjoyed it, and the harp sounded so beautiful in the music room. I know Prince Michael really enjoyed meeting you too

Dear Valeria, What a terrific harpist you are! Thanks so much for working/playing at The Royal Society of Medicine. I know your involvement in the evening’s event proved popular and was well received.

Valeria is an exceptional harpist with a fabulous technical ability, combined with wonderful musicianship

Thank you for your beautiful music Valeria, you are a very talented young musician

Harpist Valeria Kurbatova stole the show for me with her consistently rhythmic arpeggios perfectly complimenting luscious chordal sections from the cello and violin.

Hi Valeria, Thank you for your performance at the event on the 8th of December 2015 – at ICE, One Great George Street. We had great feedback from our attendees about the music. You were very professional through the evening and your performance was excellent!