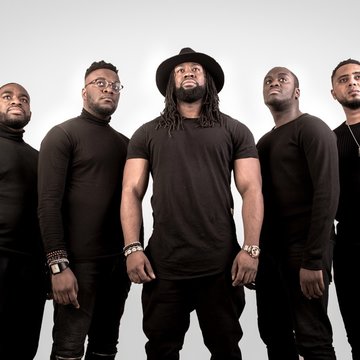 The signature Vadé a cappella sound is a beautiful amalgamation of modern Doo-Wop, Gospel & RnB fused with Jazz, Soul and a Motown flair!
3 of 6 photos
Singer
High Wycombe
Verified profile

Armed with scintillating talent, a commitment to excellence and a vision to bring a fresh sound to a cappella music worldwide, Vade was born as the brainchild of Philip Yeboah and JJ Hammersley in the summer of 2013. Hailing from the United Kingdom, the a cappella quintet is made up of Philip Yeboah, Joshua 'JJ' Hammersley, Jermaine Sanderson, Roy Crisp and Joseph Anti. The signature Vadé sound is the perfect amalgamation of modern Doo-Wop, Gospel & RnB fused with Jazz, Soul and a Motown flair! Over the years, Vade has become known for their smooth harmonies, vocal dexterity, imaginative arrangements and mesmerising sound; all contributing to their unique brand of a cappella. Their debut album, recorded at the world renowned Abbey Road Studios, 'Cry Your Heart Out’ was released in December 2017 following their success as winners of Sky One’s Sing: Ultimate A Cappella talent contest which landed Vadé a major deal with Decca Records. The future is bright for these rising stars who are working tirelessly to follow in the footsteps of some of their greatest musical inspirations by creating phenomenal music and building a legacy that will transcend time!

Singers in the UK
Singers in Luton
Singers in St Albans
Singers in Milton Keynes
Singers in Hertfordshire
Singers in Maidenhead
Company
Discover
Download
Join us on
© Encore Technologies, Ltd.
Crafted with bagels and in London