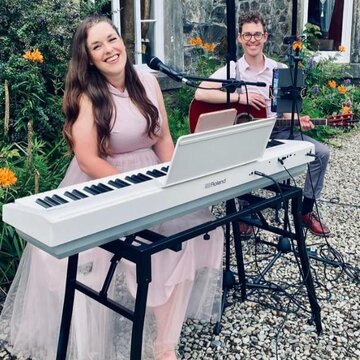 Heartfelt, unique covers of your favourite songs. Professional performers, dedicated to creating the perfect atmosphere on your special day!

Kieran Francis Begley & Emily Ashton - a real couple, brought together through performing together! As working professional actor-musicians trained in Musical Theatre and Acting, we have both been performing for a number of years. We offer an incredibly versatile range of acoustic covers on guitar and piano, as well as being able to offer solo classical or contemporary piano for any portion of your special day. Our set list ranges from pop and traditional folk covers to jazz and musical theatre, and we take great joy in being able to tailor our set list to perfectly suit the atmosphere of your wedding or event.

Pop
Perfect
You’ve Got A Friend
Heaven
Fields of Gold
Beneath Your Beautiful
May It Be
Make You Feel My Love
Have I Told You Lately That I Love You
A Thousand Years
Thinking Out Loud
Say You Won’t Let Go
Shut Up and Dance
Scottish Traditional
Wild Mountain Thyme
Ae Fond Kiss
Caledonia
Green Grow The Rushes Oh
My Love Is Like A Red, Red Rose
Aye, Waulkin O
Skye Boat Song
Loch Lomond
Disney & Musical Theatre
At Last I See The Light
My Romance
Someone To Watch Over Me
When You Wish Upon A Star
Beauty and The Beast
You’ve Got A Friend In Me
Can You Feel The Love Tonight
A Dream Is A Wish Your Heart Makes
If I Loved You
Customer questions

As a real couple, we take great joy in performing together and we are always told that this really shows! The versatility of what we can offer is also always commented on - we are able to really tailor our set lists / set ups to suit the atmosphere you want to create!

Between us we have performed on stages all over the UK including at the Glasgow Royal Concert Hall, Wembley Troubadour, the Royal Conservatoire of Scotland, Glasgow’s Kings Theatre, Beacon Arts Centre, Eastwood Park Theatre, Glasgow’s Oran Mor, Motherwell Civic Theatre, The Ayr Gaiety, and at the Edinburgh Fringe (Riddlers Court/Assembly Hall).

As we are relatively new, we haven’t performed anything high profile yet! However, in 2019, as professional actors, Kieran performed as legendary tennis player John McEnroe in ‘Rematch Live’ - a live theatre event in association with Wimbledon, and Emily originated the role of ‘Belle’ in the Scottish premier tour of new musical ‘The Wedding Planners’.

Our standard line up is vocals with accompanying acoustic guitar & piano. Solo piano can be requested along with more upbeat sets with backing tracks.

We understand that timings can easily change - we will always try our best to be flexible and understanding. If timings change on the lead up to the event, just give us a message!

Absolutely! We are happy to provide a playlist in between sets, free of charge.

We usually set up and sound check around one hour before the performance , or before guests arrive.

We are unable to roam during acoustic sets, however we are happy to do so when performing with backing tracks.

Absolutely - it is extremely important to us that we tailor our performance to suit your event.

We are happy to learn any extra songs, however there is a small fee of £15 per song to cover rehearsal time.

Pretty sure this is my new favourite band.