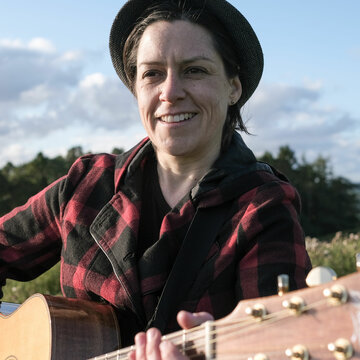 If Tracy Chapman married Joni Mitchell but then had a saucy love affair with Ani Difranco, you’d get Jenny Biddle. With SIX albums under her belt and an iTunes chart-topping single, indie folk/blues songsmith, Jenny Biddle, wraps herself around her guitar, and like a marriage between body and instrument, she commands the guitar to talk “with uncommon skill and absolute self-assurance” (Syke, 2013). Her audience is compelled to join her on a voyage of passion and story in song. Acoustic guitar-maker*, proficient pianist, recovering chocoholic, and harmonica squawker, our Aussie singer is now based in sunny Scotland, touring internationally, and practising the art of making a woodstove fire with wet wood. Destined to walk a musical path, a brief encounter with the ukulele at just 4-years-old lit the fire for Jenny’s obsession. Moving quickly to a lifelong love of the piano at age 5, followed by an ardent affair with the guitar, age 9. Original compositions soon followed, but from age 12 she fell under the influence of a rock ‘n’ roll lifestyle, regularly consuming 8 teaspoons of sugar in her cups of tea. Suffice to say, she received treatment for her addiction but has since discovered she’s a lesbian. After a 4-year BA Dip Ed degree in her hometown of Sydney, she spent a mere two days casual teaching in primary schools. Realising 10-year-olds were taller than her; she threw in the towel, hit the stage, and released her debut studio album Chest of Drawers in 2009 at The Basement, Circular Quay. This album was met with universal praise; “Beautiful, no-nonsense folk music, with one of those great emotive voices that echoes just a touch of world-worn huskiness” (Dom Alessio, Triple J), “… quite simply remarkable” (Trad & Now Magazine). It is reported she once received an email from a man requesting the dimensions and range of “chest of drawers” for purchase from her online store. In the company of Tracy Chapman and Passenger, Jenny’s Hindsight single HIT #9 in the iTunes Songwriter Charts in 2013. She also held the prestigious title of Melbourne’s Best Busker 2010-2012 for 3 years running, along with the People’s Choice Award at the Tamworth Country Music Festival Busking Championship 2012. Her third album Hero in Me was funded by loyal fans and produced by Thirsty Merc’s former guitarist and legendary producer, Sean Carey. “From the growls of her more country tracks to the way she lulls you in to her ballads….. It has sunshine, clouds and places in the sky to get to” (Mariella Mejia – Gaydar Girls). The music video for the popular title track, written and directed by Rebecca Greensill (Flying Man Films & Home & Away), sees Jenny in a Lyrca superman suit, with lumps in all the wrong places. Crowd-funded again by eager fans, her Cover to Cover album bears witness to Jenny’s musical dexterity, delivering ingenious cover renditions by Joni Mitchell, Leonard Cohen, Cold Chisel, Fleetwood Mac and more, while she plays her self-made baritone guitar, harmonica, haunting piano and more. Be sure to witness live blues/roots version of Michael Jackson that sees her exploding into a 10 minute sweltering guitar improvisation. Her double live album, Live at Selby Folk Club, has been toured Australia-wide, the UK and Ireland. Playing over 200 gigs a year since 2006 Jenny has supported the likes of Lloyd Spiegel, Jen Cloher, Tony McManus, Jeff Lang, Cotton, Keays & Morris. Live on stage, with “a banter which is honest, direct, personal, affectionate, funny and utterly engaging” she has “that peculiar knack for making a large space like a lounge room” (Syke, 2013), her audience laughs and cries in all the right places. There is an indisputable sophistication in her lyrics that touches upon issues that affect us all; love, loss, hopes and fears, but also delves into the dark honesty of eating disorders, sexuality, depression, only to be lifted by her unexpected comical interjections between songs. The guitar nuts are astounded by her ability to intertwine bass notes, percussion and melody so seamlessly that one could believe there are more instrumentalists on stage. Celebrating over two decades of guitar playing, our striking female guitarist hosted workshops at festivals such as Port Fairy Folk Festival, and was sponsored by APRA as the 2013 Artist in Residence at Macquarie University lecturing about alternate guitar tunings, songwriting, performing, and advanced guitar techniques. Despite her vast experience, she spends her spare time in front of the mirror, continuing to develop guitar facial expressions in an effort to boost her meagre Guitar Hero score beyond 22%. Jenny Biddle is a striking, refreshing and sweet person. She’s a master of her craft. Own her complete catalogue and catch her live now! *Jenny’s self-made acoustic guitar was part of a first-ever Australian Tone Woods Hand-made Guitar Exhibition called ‘Beyond the Trees’, held at Monstalvat, Melbourne 2013 with the support of Chris Wynne & Thomas Lloyd Guitars.

I will always try to be flexible to help ensure your event runs as smoothly as possible. If timings change slightly in the run up to the event just let me know.

Yes. I can hook up an ipod to my PA system, supplying background music between breaks to keep the ambience going. If you have a smart phone, depending on the connection, I may also be able to set up your playlist.

I usually set up about 1 hour before the performance time. As soon as our PA is set up we can provide a free playlist service to help set the atmosphere and get your guests ready for our live performance!

My set lists is crafted from countless performances and learning what works best to for the room, the guests, and the event. However, I'm definitely happy to chat through and make sure we find what works for your event.

Yes, absolutely. I bring my own instruments, PA/sound equipment, and ipod for background music.

If a song isn't included in my song list there may still be a chance we already know it. If there is a special song you'd like me to learn I am happy to do this for you. There is a fee of £50 for this service to take into account rehearsal times, etc.

Clients love that I tailor my music to suit the event. Whether it's a concert, background music, upbeat, or downbeat, I try my best to read the vibe and create a great atmosphere. I particularly love story telling

In 2008 I sang at the opening for the Melbourne Marathon, Australia, with an audience of over 8000 people. Wow!

Jenny was great, a really talented musician and singer and everyone thoroughly enjoyed her performance.

An effervescent storyteller with pop and fizz

...that peculiar knack for making a large space like a loungeroom.

Beautiful, no nonsense folk music. Jenny's got one of those great emotive voices with just a touch of world-worn huskiness.

From the growls of her more country tracks to the way she lulls you in to her ballads….. It has sunshine, clouds and places in the sky to get to.