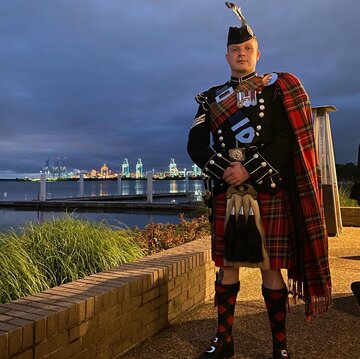 Professional events Piper with an immense amount of experience. From Lone Piper at the Commonwealth Games to Functions around the globe!
3 of 9 photos
Bagpiper
Edinburgh
Public liability insurance of £1 million

Starting to play the bagpipes early into my childhood, it quickly grew into a passion. I competed in several Piping Competitions with my local band at numerous Highland Games, including the World Championships. At the age of 17 I joined the military and since then have received an incredible amount of tuition and education on this instrument, as well as some amazing opportunities to play all over the world. I’ve fully achieved my PDQB Level 8. And going on to degree work in music. I’ve played at Events all over the world, covering every single state in America (bar Alaska), China, Japan, Korea, Colombia, Norway, Cyprus.. to name but a few. I’ve performed on the BBC2 New Years Hootenanny, as well as the Queens Birthday Parade (Trooping the Colour), 3x State Banquet’s, The Royal Edinburgh Military Tattoo, Lone Piper at the 2014 Commonwealth Games, Presidents Day Larade Colombia.. as well as numerous events across Scotland and the rest of the UK. Looking forward to hearing from you! Damian

The passion that I bring to the table. Especially at parties where there is scope for a more “fun” way of playing the pipes, rather than strictly classic.

I was Lone Piper on the 2012 Commonwealth Games Gymnastics Medal Ceremony, which broadcasted to over 72 Million people live. Aside from that, performing for Her Majesty Queen Elizabeth II, Barrack Obama, BBC1 and BBC2.

Not a problem, as long as you let me know as soon as possible I will be able to remain flexible and together we’ll ensure everything runs smoothly.

I usually arrive atleast 30 minutes before my first time, which enables me to make sure everything is in order. I can have my bagpipes set up and tuned to perfection within 2 minutes.

Of course, I know hundreds of tunes by memory, if there is anything in particular (even if not on set list) the chances are I will know it.

Yes, dependant on notice given - most likely I will already know the piece.

Standard Prices
All prices include:Consulatation beforehand on Zoom / Phonecall to ensure any requests or ideas you have are accommodated.
Packages
Wedding
Piping the guests into the Wedding Venue, then Piping a request as the Bride arrives. Piping Bride and Groom out of the Venue. Piping Guests into the Reception, Piping in Top Table plus 1 set.
£300

Damian thankyou for coming and playing with the Orchestra! We simply loved your performance and can’t wait to have you back for next Hogmanay. Superb!

Absolutely top class performance. Completely set the tone for the remainder of the Wedding, true professionalism throughout. 10/10