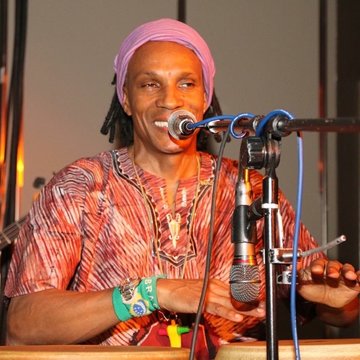 XAVIER OSMIR, From São Paulo Brazil; Singer & Percussionist playing Brazilian/Latin and World music in London for the last 24 years. Have played and participated in various TV shows and Private events like Paul O' Grady TV Show, strictly come dancing TV program, Jamie Oliver's 15th restaurant, Prince Charles Trust, played with Sambosa at the Royal Albert Hall, Guanabara Brazilian Club, Queen Elizabeth Hall, the South Bank Festival and many other functions. I am also the Leader Singer of the prestigious London School of Samba since 1996, Singer of the Grand Union Orchestra of London. Have been performing with Brazilian bands in London and UK such us Viramundo (London), Eriokan (London), Ziriguidum (Bristol), Toque Tambor (Hitching); have recorded one track of bosa nova, titled "Agua de Beber" for the CD "The introcollection Brazil". I am also composer and songwriter.

Incredible! Very professional and made the evening a success. Takes the part to another level. Xavier is also a super nice guy! Thank you!

The group is fantastic, they played for my 40th Birthday Party and it was a great band to have. I would recommend Batuke Samba Band

Verified
Lola B, 2 years ago

Batuke Samba Band were superb, all our guests enjoyed their performance at our Dinner Dance May Ball event in Chingford. They really brought the party and the fun. We look forward to having them perform for us again best year! Lola

These guys sound fantastic, look fabulous and are a delight to work with. Guaranteed crowd-pleasers, always bringing a ray of Brazilian sunshine ... 5 Stars

Verified
Marcelo A, 3 years ago

I saw Samba Stones play first time back in April at Wylam Brewery in Newcastle. I was so impressed with their energetic and high skilled performance of my favorite Rolling Stones songs in a super attractive Samba style that I took my whole family to catch their performance at the Rhythm Tree Festival in July, and they were absolutely incredible."

I was impressed with their energy and talent on stage. They were one of the best bands of the festival in Isle of Wight. I enjoyed it a lot!

Just brilliant! The band is full of energy and personality. Loved it!

Verified
Milly B, 3 years ago

Amazing show, so much energy and talent on the stage!" Milly

Verified
Odara B, 3 years ago

It was magical, fiery, amazing energy. What a combination Rolling Stones with Brazilian rhythms! Best show for a long long time! I was electrified at the end of it! We want more!" Priscilla Diniz

I went to their show in Newscastle and loved it. I couldnt stop dancing. Brazilian music is great.. and combined with Rolling Stones, it`s a must!

I had a lot of fun at their concert in Newscastle. They have a very unique style and a lot of energy on stage. Looking forward to their next gig.

Sambossa played at my birthday party & they were marvellous. They had the crowd dancing all night, look amazing & have a superb & full sound for a quartet. I look forward to next opportunity to book them. Cris Medeiros 10 03 18

What a pleasure it was to work to you! I would like to say thank you very much for all your support on my event! The band were fantastic, extremely professional, and super beautiful and nice! The band were completely in line with the music, therefore having a very successful show. The crowd could not have enough of their energy! It really was an absolute pleasure to watch your performance! I am looking forward to our next event!

Many thanks again to you and the band for putting on such a great show a couple of weeks ago and for all of you for being such a pleasure to deal with. Our set up was a bit of a challenge in terms of getting people across and inside from where they had spent the afternoon out on the grass, settled in next to the bar, but you certainly managed it. Many of our guests have told us how brilliant you all were and that you were the best band they’ve heard at a party. And I think you introduced a few to some more interesting rhythms than they are used to.

Just wanted to drop you a line to say thanks to you and the band for your fine performance at the Carnival. Sorry did not get the opportunity to thank you on the day as I was rather busy. Hope you all enjoyed it and look forward to linking up again in future.

We have booked Sambossa for several events here at The Wimbledon Club. They were fantastic & so versatile. Able to provide quality background music but also create a party & get everybody dancing when required. They look & sound fantastic, are very punctual & low maintenance. 5 stars.

Sambossa have performed for us at private events on many occasions & we have found them to be fantastic. Punctual, flexible, easy to get on with & they sound & look amazing.

"I would like to thank you for an absolutely cracking gig and DJ set on our wedding day last weekend! Everyone really loved it, as you could probably tell and the live set was magical. As a bride on my wedding day one would expect I would say that anything was magical, but for me the music was the best bit. I could really let loose and really enjoy the wedding after all the stress. Would you be able to send through the set list of what the band played, if you have one? Although I was on the dance floor the whole time it's all a bit of a blur at the moment. It was great meeting you and I hope you guys enjoyed the gig too and had a good time" "You absolutely smashed it at our wedding last Sat at Sandford Springs!!! The atmosphere was to die for. People who never ever dance got up and everyone were raving about the quality of the music and performance. Thank you very much for making our day so special and I would book you again any day! Lots of love, Lana Many thanks again Svetlana Copleston"

Felicity and I want to say a massive thanks for playing at our wedding yesterday. So many of our friends have been saying how much they enjoyed dancing to the music you played. It was great to meet you and the rest of the band.

Verified
Lucy A, 11 years ago

You brought your brilliant band to Burnham Overy Staithe for us in August 2010 and were such a hit that every since everyone has been pestering us to ask you to return!