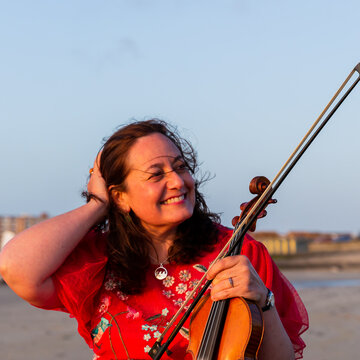 About Violin By Abigail

Hello, I am Abigail Deeks, a classically trained violinist and pianist based in East Sussex. My musical journey began at the age of 7, when I began learning the violin. I later trained under Pavel Crisan at The Guildhall School of Music, before going on to study a music degree at Roehampton Institute. With over 20 years of performing and teaching experience, I find myself continuing to return to my classical roots. I also enjoy the variety and pace which folk and rock styles bring. My aim is that by playing at your event I will be making it meaningful to you. This ultimately creates something very personalised and emotive. I truly believe that my services are there to help you make memories. Delivering a programme which is tailored to each individual need is my driving passion. Whether you are looking for someone to accompany you as you walk down the aisle, a soloist who can add a modern twist to your favourite songs, or someone special to add to your corporate event, I am more than happy to help. I strive to come to each event or recording session offering the very best in terms of both quality and originality. Have a look through my repertoire list. Or give me something new to learn and explore. I would love the chance to work with you to create a perfect and unique day. My Musical Styles: Classical, Folk, Jazz, Pop, Rock, Klezmer, Music from Musicals and Film. Notable performances: The Royal Albert Hall The Gulbenkian St Mary in the Castle, Hastings Southwark Cathedral Assembly Halls Theatre, Tunbridge Wells Canterbury Cathedral The Royal Festival Hall Recording experience: Bootleg Beatles Gripper Lee 3 Lloyd Darbon Elaine Sanders Services: Birthday and special event recordings Weddings Funerals Corporate events Session work Event performances I can provide my own equipment if required including PA and live recording equipment. I am a member of the Musician’s Union and have public liability insurance.

Clients love my warm and engaging performances. Played with technical expertise and feeling. The love that I have for what I do is obvious and this captures the audience. Clients appreciate my professionalism and my reliability. My flexible approach to planning and availability for learning new pieces. Couples have the opportunity to make their day unique.

Yehudi Menuhin and Itzhak Perlman were my influences as a child and were the first recordings of the violin that I heard. As a teenager I loved the varying styles of Nigel Kennedy and his quirkiness. Folk violinists it has to be Eliza Carthy and Seth Lakeman. For the band element Jon Sevink and Erica Nockalls.

I offer solo violin, with or without a backing track.

I am flexible with time changes but would ask that you let me know as soon as you do.

It takes me 30 minutes to set up but I will always arrive an hour before I play.

I have an extensive repertoire list that you can choose from. I am happiest when we work together to create a programme which suits you best.

Yes, instrument and amp or full PA system will be provided by me.

I am happy to learn 3 new pieces for your event. After that I charge £20 each piece to take into account extra rehearsal time.

5 out of 5
20 verified reviews
Satisfaction

Abigail was absolutely brilliant as the musician for our wedding ceremony! She responded to all my messages promptly and was always so helpful. Her song list is so comprehensive and she even went above and beyond to put together a specific playlist for us with the folk music vibe we were looking for. I would definitely book Abigail again :)

Abigail was absolutely incredible! From her professionalism in the organisation beforehand to the remarkable performance on the night! She has an wonderful array of song selections that made the night classical with a modern twist. My team were delighted when they heard her play :) 5***

Our experience through booking with Encore has been so smooth and easy. However Abigail made this booking even more perfect and made the process before the wedding stress free and easy. Abigail communicated with us superbly and granted every wish we had for our wedding ceremony. No song was too much and never made us feel like we were asking for too much. Would not think twice about booking Abigail as she was professional, kind and above all else a great violinist. Thank you again Abigail!

Honestly, we couldn't be more thankful. Abi was fantastic from start to finish. Accomadated our choice of music without a blink of eye...and also our pre wedding overthinking questions haha. We knew we was safe in her hands from the off and no ask was too much. Thanks again Abi!

Reply from Violin By Abigail

Your choices of music were superb. It was a pleasure to be part of your beautiful day.

ES
Emma S
3 months ago, for a Wedding in Wellington House

Out of this world! We kept Abigail as a surprise from our guests the day of our wedding. When I came down the Isle with My Dad Abigail played Beauty and the Beast and cannot explain the feeling everybody felt when she started to play! Abigail is amazing, so kind and thoughtful and will go above and beyond for you. Abigail it was such a pleasure to have you with us and you was an absolute credit to our ceremony, it was everything we could of asked for! Thankyou. Emma and Jack x

KY
Kiel Y
3 months ago, for a Wedding in High Rocks Ln

'Lovely all round: We had Abigail play at our wedding. We could not fault her service and her abilities. Many guests gave us compliments on Abigail and we would highly recommend her. She was easy to book and flexible, as willing to learn new material. We would definitely have her play for us again if the occasion arose. Thank you again Abigail for making our Wedding Day special.'