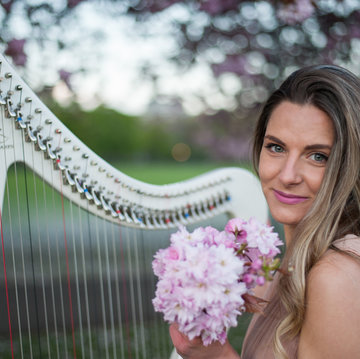 Tsvetelina is a UK-based harpist with more than nineteen years of playing experience performing at events, weddings, concerts, and more. She has participated in many solos, chamber and orchestra concerts in Bulgaria, France, Italy, Cyprus, Greece, Dubai, Turkey and the United Kingdom. Originally from Bulgaria, her career ambitions brought her to all these places in the world. In Edinburgh, Tsvetelina has performed at the Usher Hall, National Museum of Scotland, Royal Yacht Britannia, Surgeons' Hall Museum, Assembly Rooms, the Hub, the Principal and the Balmoral hotel. She is a graduate with a First Class Honours from Royal Birmingham Conservatoire where she studied with Catherine White and later with Eleanor Turner, Katherine Thomas, and Catrin Finch. Between her studies she had a year of professional growth as a harpist in Dubai, working for one of the best music agencies in the UAE - The Fridge. She is also a graduate of National Music School “Lubomir Pipkov” in Sofia with profile harp and highest grade diploma. She has been part of Youth Orchestra ‘Sofia’, Cyprus Youth Symphony Orchestra, Classic FM Orchestra, Thessaloniki State Symphony Orchestra, Orchestra of Russe Opera House, Birmingham Conservatoire Symphony Orchestra, Halesowen Orchestra, People's Orchestra among others. Also, she has been part of the Bulgarian National Children’s Choir and Birmingham Conservatoire Chorus. She is currently a part of the Conservatoire Folk Ensemble as well as a member of the United Kingdom Harp Association. Her various repertoire covers music of different musical styles, like Baroque, Classical, Romanticism and Impressionism, as well as Contemporary music, Film soundtracks, Popular songs and Blues and Jazz. Tsvetelina is always open for new and challenging music. Her desire is to explore the music of the world and to enrich her knowledge in different areas of music, as well as to popularize the beautiful musical instrument – the harp with the peace, harmony and fascinating sound it brings.

I am willing to be flexible, so if you need to change the times please get in touch.

I usually aim to arrive at the venue an hour in advance to have enough time to set up and tune.

It all depends on the distance.

For outdoor performances, I would require a solid surface for the harp (e.g. pavement, platform, not directly on the grass) as well as a cover in case the weather conditions change, as the harp is a quite valuable instrument and could get damaged by the rain and direct sunlight.

Absolutely! You could choose any songs from my repertoire list as well as three extra pieces that are not included. I would be pleased to prepare arrangements of your favourite songs!

Standard Prices
All prices include:All equipment and 3 unique songs choices for your special occasion Please note that the price may vary depending on the distance. For a full quote please click: “Check availability'
Tsvetelina

Tsvetelina played absolutely beautifully and it really made the party very special.

CB
Caroline B
2 years ago

Tsvetelina was excellent in all respects. She prepared three additional arrangements on request for a very reasonable fee and played beautifully for our wedding ceremony and drinks reception. We can't recommend her enough.

Tsvetelina really came to the rescue as this was a very popular wedding date. There was no fuss and we managed to arrange everything very quickly and smoothly. I was very impressed!

On behalf of myself and Amy Seton (owner of The Food & Drink Events Company), we just wanted to pass on our gratitude to Tsvetelina for her amazing harp performance at our Enchanted Evening event on Saturday. She played beautifully and took the time to talk to guests who approached. We've had some fantastic feedback from attendees to tell us that she was "calm and gentle" and "immensely talented". The music really made the evening, All the best, Vicky Osgood, Events & Marketing Manager" And thanks to Birmigham Conservatoire for the opportunity

'The harp player is magical * a great asset to Ritz-Carton! Loved it!'