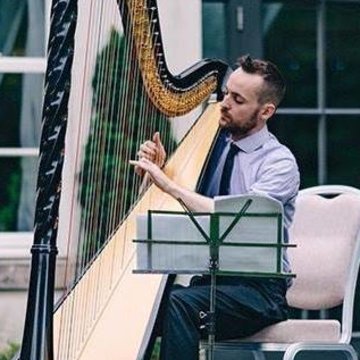 Tomos was born and raised in Wales, studying at the Junior course of the Royal Welsh College of Music & Drama and at Eton College, where he was awarded a Major Music Scholarship. He was then awarded scholarships for his undergraduate and Master's degrees at Trinity Laban Conservatoire of Music & Dance, where he studied with Gabriella Dall'Olio and won the John Marson Prize for an outstanding musician. Having won numerous prizes and awards at prestigious international competitions while still at conservatoire, Tomos is now making his name known as a recitalist on the London circuit, with recent solo performances at the Wigmore Hall, St John's Smith Square, the 1901 Arts Club and St Martin-in-the-Fields, and his performances have been broadcast on BBC Radio 3. He has won a place on the Philharmonia Orchestra Instrumental Fellowship Programme 2017-18 which entails working with the orchestra and receiving mentorship from the orchestra principals, and he enjoys freelancing with orchestras across the UK such as the London Philharmonic Orchestra. A keen chamber musician, Tomos performed live on prime-time BBC News at the opening night of the Cutty Sark concert space in Greenwich, and since 2015, Tomos has been performing as half of the flute & harp duo Siren with Claire Wickes (English National Opera, principal flute). Tomos also has a true passion for contemporary music; he recently performed 11 world premieres as part of The Riot Ensemble. Tomos considers outreach work highly important and performs at hospices and care homes with organisations such as Live Music Now! and the Concordia Foundation. He is harp teacher at Charterhouse School, Lingfield College, and the Hindhead Music Centre.

Tomos was perfect, he was so receptive to our requests before the event and was professional during it. Would highly recommend and I would book him for an event again if the opportunity arose.

Tomos was quite simply....fabulous! From the initial email contact, to meeting with him, through all communication and then the simply stunning music he played on our wedding day, we could not have been more impressed! The harp arrangements he made for our pretty eclectic choice of tunes were just amazing. We wouldn't hesitate to recommend him and I just wish we could have our ceremony again to hear his wonderful playing! He's fantastic!

Tomas provided an excellent atmosphere at our wedding, he played a beautiful version of my favourite song as I walked down the aisle and a lot of our guests commented on his lovely playing.

Verified
Jayna B, 1 year ago

Carlo and I would like to say our heartfelt thanks to Tomos for his excellent service and professionialism. He was a brilliant addition to our wedding and all our guests commented on how beautiful the harp sounded. Loved the fact he was able to play Bollywood which made it more special. Would definitely recommend Tomos! :-)

Tomos was brilliant. A lovely man who made my wedding even more special 😍

Verified
Elissa B, 1 year ago

Tomos was great from start to finish. His communication was quick and friendly and we really felt he wanted to make our ceremony special. Meeting Tomos before the wedding to discuss song choices and hear him play was wonderful. We had so many complements on his performance from our guests and he made the whole ceremony and drinks reception extra special.

Tomos is an extremely talented musician and was a fantastic addition to our wedding! Would highly recommend him ..

Tomos was amazing! Everything was perfect.

Booked Tomas as sounded perfect for what my daughter wanted for her Wedding. The day was very hot and sunny. The ceremony took place in the Great Hall of the venue then afterwards the venue put reception drinks served outside whilst photos were taken. Therefore we have no idea if Tomas continued to play for the time booked and unfortunately didn't get to hear him play or see him.

The booking was very easy to make. Tomos played beautifully and a wide range of music, classical and folk and requests at our Dads funeral wake. He was very professional and friendly and some of those present enquiries about booking him too. The harp music and sound was perfect as background music for enabling conversation, lunch etc. The instrument itself proved a real talking point too!

Tomos was absolutely brilliant. Not only an amazing musician but great in the run up to our event with great communication and good advice. This is definitely your man if you are looking for a harpist

Tomas was fantastic!! He made my wedding extra special with his beautiful music. Tomas really listened to what we required and his communication has been excellent throughout. Our guests loved the variety he played on the day and he even managed to play an old Bollywood song on his harp for us! Would highly recommended!

Really good - everyone enjoyed the music

Tomos was wonderful for our wedding, he was punctual and smart and the music sounded just beautiful. He kept in contact with us throughout the booking period and really brought something special to the day. Can't recommend him enough!

We booked Tomos to perform in our Peterborough Sings! concert and were delighted by his playing. The whole orchestra sounded fantastic, and we wouldn't hesitate to book Tomos again.

Verified
James A, 2 years ago

Dear Tomos, From both of us we would like to say our heartfelt thanks for your excellent service on the day. You were extremely professional, self-sufficient and very tolerant of the changeable weather! Not to mention your excellent playing skills! In spite of the weather we had a wonderful day and the rain was actually quite fun for the ceremony with the references to sun shining and clear skies in the readings! Your rendition of comptine d'un autre ete as Milly walked in was superb and really worked with the outdoor celebration we put together. Best wishes, James and Milly x

I can't thank you enough for today, it was nothing short of absolute perfection! Your arrangement of our chosen songs was absolutely amazing, it really did melt both of our hearts - particularly Crystal's entrance and the first piece during the signing. I'm so sorry that I didn't manage to thank you in person; all tied up with herding our guests! Our most heartfelt thanks once again, for making our big day absolutely perfect. The compliments on your performance are raining in, even as I type this email!

Hi Tomos, I never got a chance to even say hi to you, let alone thank you for the music last week - everyone told me how beautiful it was and I got really quite choked up when I walked down to How Does a Moment Last Forever - it was exactly how I'd pictured and hoped it would be, so thank you so much!!!! It's a shame I didn't get to meet you in person, but from the bottom of my heart I am so thankful for your efforts and for learning new songs for us and making our day so special, thank you :). Thanks, Shivani