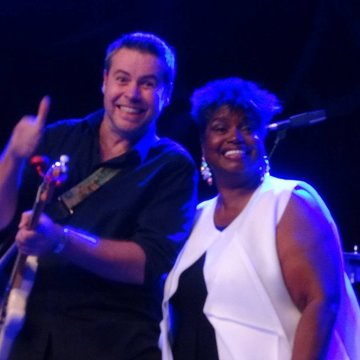 I am a guitarist/bassist/keyboardist/producer, hire me!

I started playing guitar when I was 12 years old. By the time I was 19 I was a professional musician. I have played for, and performed with, numerous artists and bands in virtually all styles of music including Classic Rock, Soul, Funk, Blues, Jazz, Latin, Country and Reggae. Since 2000 I have played in, and depped for, many top function bands across the South of England and as a result I have built up an extensive song repertoire. My ability to learn songs at very short notice has come in handy many times! I have also been a guitar teacher for the last 12 years, in schools and as a private tutor. As a producer and co-writer I have worked on original material with a variety of artists, achieving two No. 1 albums in the UK Soul Chart: 'Peace Of Mind' by Alicia Myers in 2011 and 'The Lovetown Allstars' in 2013, which included tracks by Junior Giscombe, Geraldine Hunt and Carol 'Salsoul' Williams. I have been lucky enough to work with some legendary artists in the Soul and Funk genres. Over the years I have also become an accomplished bassist, pianist and backing vocalist. I am equally happy touring, recording, writing, producing or teaching. I am available for live and studio work nationally and internationally. I take great pride in what I do and have a reputation for high standards of musicianship, professionalism and attention to detail. Artists I have worked with include: Al Hudson (One Way) Alicia Myers Alton McClain Andy West (Warner/Chappell) Archie Bell Atlantic Starr Bosra Sham Carol Williams (Salsoul) Cheri Cliff Dawson David Pic Conley Doc Shaw Garfield Fleming Gary Poole (BBC's The Voice) Gee Bello (Light Of The World) Geraldine Hunt Glenn Jones Glenn White Headbound Junior Giscombe Kano Keith Rodgers (Break Machine) Kele Le Roc Laura Jackson Leroy Gomez Marc Sadane Odyssey Orlando Johnson Rachel Hylton (X Factor) Rachelle Laisnez Santa Esmeralda Shirley Jones Surface The Manhattans Tracy Hamlin Troy Ellis Victor Jones Yarbrough and Peoples

I just want to say a massive thank you for the cracking set on our wedding day. A good band is always the difference between a good event and an amazing one - you were that and more. Everyone said how awesome you were, I hope you enjoyed playing as much as we enjoyed dancing.

We had the most fantastic night with this band at our Christmas party. The guys were so lovely and helpful and made sure everything ran smoothly so we could sit back and relax. Sound quality was perfect, three very talented musicians, we can't recommend them enough.

These guys did a fantastic job, especially considering there were some unruly guests! They sounded flawless and everyone had such an amazing time dancing and singing along. My only complaint is it was over too quickly! 5/5

We just wanted to say thank you again, you were brilliant and helped make our wedding really special. Everyone had good things to say about you - including all the people sitting around the fire listening from behind the marquee! We had such an amazing day and we're so pleased we booked you. Best wishes Tim and Kate

Verified
Katie B, 2 years ago

I just wanted to say thank you again. We absolutely loved having you guys there last night. So many people told me how brilliant they thought you were and you really gave the night a great atmosphere. Thank you so much.

Thanks so much for a fantastic performance at our wedding! They had a great setlist and everyone from 4 to 90+ years old enjoyed dancing along. The communication beforehand was very good and we absolutely loved their cover of our first dance song which they learned for us. Highly recommended! 5/5

We just wanted to say a big thank you to the band for playing on our wedding day. Everyone enjoyed the music and we really enjoyed ourselves!

Verified
Hannah B, 4 years ago

The band were fantastic and everyone commented to me on just how good you are. In fact a friend of mine has recommended you to another friend for a wedding. I only wish I had booked you for a little later but I guess it is best to leave people wanting more. Thanks again you all exceeded my high expectations.