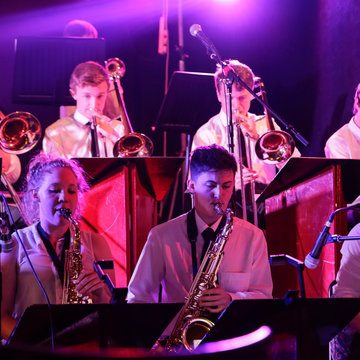 Multi-Saxophonist and Clarinetist based in York, who enjoys playing other instruments such as Trumpet, Bass Guitar and Flute.
3 of 14 photos
Tenor Saxophonist
Leeds
Public liability insurance of £5 million
Verified profile

At the age of 8, Theo began to play the Classical Guitar at his Primary School. During his time at his Primary, he heard a Clarinet for the first time and was hooked. A year later after passing his Classical Guitar Grade 1, his parents bought him a Clarinet. Absolutely enthralled with it, he passed his Grade 5 within two years. His sister then purchased herself an Alto Saxophone, his Dad following suit and buying a Tenor Saxophone too. Having only ever seen pictures and knowing the general stigma of the Saxophone and how cool it was, he was hooked onto the Tenor, just like the Clarinet. He adopted the Tenor after his Dad stopped playing , and went on to have lessons. Three years later, he finally got round to doing his Grade 5 Theory and then passed his Grade 7 with a Distinction on the Tenor. Another two years passed and he picked up the Alto too, of which his sister was now done with having bought herself a new Yanagisawa Alto Saxophone. During this period of Tenor Saxophone playing he self taught himself the Bass Guitar, and furthered his Acoustic & Electric Guitar playing. A year passed, after playing in many School shows and external productions, and he became friends with a fellow musician who introduced him to the York Music Forum. Very quickly his playing improved exponentially, becoming more and more comfortable with improvisation and solos. Half a year later, a prestigious invite only band was created of which he became 1st Tenor from the get-go. Another half year goes by, with many gigs and performances, and even competitions taking place. Having only been formed half a year earlier, they were catching big name act's attention, even being invited to competitions and to back big names artists such as Dennis Rollins. Having had such a success with these bands, he decided to create his own channel to test out recording and performance. Around the same time of creation, he started to teach himself the trumpet by playing many big band pieces. And the story goes on!

All The Things You Are
Autumn Leaves
Blue Bossa
Misty
Out of Nowhere
There Will Never Be Another You
Without A Song
Uptown Funk
Happy
This Old Heart Of Mine
Young Hearts Run Free
Proud Mary
Dont You Worry ‘Bout A Thing
Rescue Me
Get Lucky
Sir Duke
Signed, Sealed, Delivered
Some Kind Of Wonderful
Higher and Higher
Mr Big Stuff
I Feel Good
Sex Machine
Love Shack
Valerie
Respect
Pricetag
Mercy
Streetlife
Play that Funky Music
Super Duper Love
Masterblaster
Blame It On The Boogie
Car Wash
September
I Wish
Move On Up
Forget You
Customer questions

We always try our best to be flexible to help ensure your event runs as smoothly as possible. If timings change slightly in the run up to the event just let us know and we can sort something out.

We usually set up about 1 to 1.5 hours before the performance time, or whenever is best for the client. As soon as our PA is set up we can provide a free playlist service to help set the atmosphere and get your guests ready for our live performance!

If a song isn't included in our song list there may still be a chance we already know it. If there is a special song you'd like us to learn we are happy to do this for you. There is a fee of £50 for this service to take into account rehearsal times etc.

My clients love my infectious energy and enthusiasm!

I have performed all over the country, from Devon to Edinburgh, and in France!

I have mostly been influenced by Dexter Gordon, Phil Woods and Hank Mobley, but other influences definitely include Chris Potter and Charlie Parker.

I consider all my gigs high profile and bring that attitude with me also!

Standard Prices
All prices include:PA equipment not included, extra fee to be applied for such. Skype calls and arrangements all included, 1 or 2 addition requested songs depending on repertoire.
NEW!Virtual services
Personalised Music Message
Book me to create a unique music video for you to send to a friend as a gift. This could be a birthday message, first dance song for a wedding anniversary, or just your friend's favourite song to cheer them up.
£15

AK
Adam K
3 years ago, for a Corporate event in York

Amazing Saxophonist! Loved him coming to play for our corporate event - look forward to hiring him again.

MN
Mia N
3 years ago, for a Birthday party in Parklands

Theo played sax for my 21st birthday party this year and it was such a treat to have a live player added into the mix! He was punctual and polite to my family, my friends and I, and he helped create a really fun and friendly atmosphere with his playing. Everyone was raving about him by the end of the night, including me! Would definitely recommend Theo to anyone who wants something a little different, he was a huge success and I'll definitely be using him again. Mia Neave