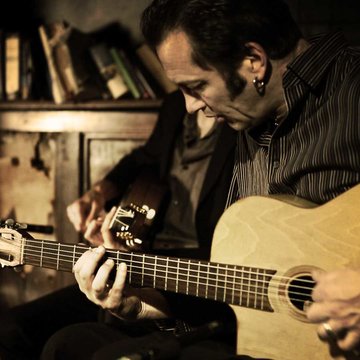 About The Phil Grispo Orchestra

The Phil Grispo Orchestra is a gypsy swing ensemble featuring a group of world class authentic instrumentalists with a genuine love and respect for the music they perform. Their specialist repertoire consists of the finest American and French swing music of the 1930’s and 1940’s, beautiful ballads from the golden age of song writing and timeless gypsy waltzes from across continental Europe. The group perform in a number of different incarnations ranging from a guitar duo, guitar trio and quartet with upright bass. The group can be joined by a female vocalist who sings in English, French and Sinti. Other musicians such as pianists, violinists, accordionists and horn players can be added to the line-up upon request. Band leader Phil Grispo learned his craft first-hand from Parisian gypsies and has spent the last 10 years honing his remarkable skills in front of appreciative audiences across Europe. As well as performances at Jazz Festivals including Garda (Italy), The Birmingham Jazz Festival and Darwen, they have also played to more mainstream audiences at Glastonbury and The Secret Garden Party.

This group have played regularly and monthly at my pub for the past two years. They are consistently professional musicians with a superb style. They always attract a good crowd consisting of locals, office workers and journalists, all of whom appreciate them as an accompaniment to the evening. The only complaints I get are from the neighbours about the cheering and whistling.

You guys were great! The event was a total success and your music brought the whole thing together. Thank you xx