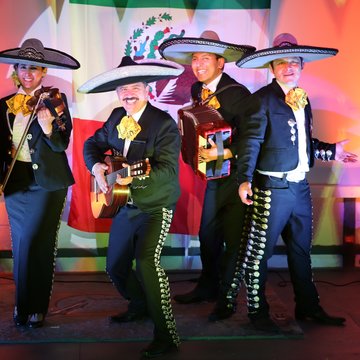 About The Mexican Way

We bring the Fiesta to your Party!
3 of 11 photos
Mariachi band
Wembley
Public liability insurance of £1 million

Co-founded by former Doritos Mariachi band member, Farman Hernandez possesses over 30 years experience playing not only Mexican mariachi music, but a broad assortment of Latin America musical genres. His well rounded playing experience, and his exposure for performing for high profile audiences, such as BBC Graham Norton Show, as well as a variety of reputable brands such as Mini and Doritos has established Farman as one of the UK's first rate Mariachi musicians. Complemented by a passionate, friendly and exceptional band of musicians, with decades of musical playing experience, The Mexican Way is remarkably placed to deliver an exceptional musical performance guarantee to give your function or event a vibrant and memorable experience. From an early age, Farman has always had an affinity with music. He first learned how to play the guitar at the age of 12, and eventually went on to study music and singing vocalisation. By his late teens, Farman participated in numerous musical presentations and competitions, performing mariachi serenades as well as other latin musical styles. Farman has been part of a number of authentic Mexican bands, taking part in television gigs as well as having the opportunity to perform in front of Prince Charles and the late Princess Diana. Farman went on to form his own Latin American band specialising in delivering an assortment of different musical styles for events and corporate functions. He even had the privilege to perform for widely known Bond actor Roger Moore. Many years later, having met founder of ‘The Mariachis’, Farman joined the group as an integral part of the band and along with the group went on to perform for various celebrities, television shows, music festivals as well as making appearances for renowned brands. Notably, Farman formed part of the Doritos Mariachi band and received exposure as an animated figure of the television campaigns. Farman has now decided to form a new Mexican Mariachi band, with an exceptionally experienced group of musicians, The Mexican Way is perfectly positioned as well as committed to delivering a truly lively and immersive Mariachi band experience.

If your timings change we will try and accommodate ourselves to your needs. Just let us know the times you wish to have and we can confirm these changes with you.

If your timings change we will try and accommodate ourselves to your needs. Just let us know the times you wish to have and we can confirm these changes with you.

Unfortunately we do not provide a DJ service.

Yes - we tend to have microphones attached to our instruments so we can move around freely to get the party started and dance around your guests.

Our band will always be well presented, and be complete with the full Mexican Mariachi attire, specially handmade in Mexico for us!

Of course! We bring our instruments with us.

If you want a special song to be played at your event and it isn't included in our song list we are more than happy to learn this song for your event.

We are professional UK based Mariachi band passionate about spicing up your party or event with some Mexican Mariachi flair, from singing to dancing around with guests. Whether it’s a wedding, event or corporate function, we bring the fiesta to your party and give your guests an unforgettable entertainment experience!

We have performed at countless of venues around the UK for weddings, birthday parties, corporate events & festivals.

The following artists are those whom which we have been great fans of and have influence us to keep playing Mexican traditional music as well as English covers: Juan Gabriel, Javier Solis, Luis Miguel, Ana Gabriel, Vicente Fernandez, Rocio Durcal, The Beetles, Bee Gees, Amy Winehouse, Michael Buble & Bruce Chanel.

We have had the pleasure to work with the following companies & TV shows: Channel 4, Switch, HEARST Magazine, Silverstone, The Only Way is Essex, Don't Tell The Bride, Chilangos & UKTV.

All prices include:Phone consultation & Free Travel in London (within the M25)

These guys are amazing! Super professional and punctual! But above anything else they are exactly what you want to lift the whole atmosphere of a party. We booked them for after our wedding breakfast, before the DJ and every single person loved them! They really set the tone to see off a magical day! 10/10

LA
Lisa A
1 year ago

They really made my party. Everyone loved them. Thanks

I just wanted to say a massive thank you for last night – the band were a big hit with our guests, everyone loved you! I'm sure we'll see you again for another event soon! Have a lovely day. Emily

JR
Joel R
3 years ago, for a Birthday party in London

I just want to say thank you to everyone in The Mexican Way Your presentation was amazing & the surprise was a success! We have received texts & emails from all of the participants at the party that it was one of the best parties they have ever been to. Thank you so much from my wife & daughter too.

Mariachi bands in the UK