The London Swing and Soul Band 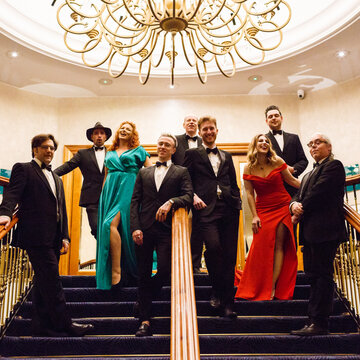 About The London Swing and Soul Band

The London Swing and Soul Band is possibly the most eclectic, interactive, international and soulful collective of musicians imaginable. Their guest singers include the best of London soul talent, as well as a Bandleader who sings in 9 languages. Its outstanding brass section is now well-known for bringing together the hottest players that perform at the UK’s finest Jazz venues and festivals, as well as alongside international celebrities such as Beyonce, Jamie Cullum, Stevie Wonder and Roy Ayers. Offering a full personalised entertainment service in sound management, disco lighting, DJing, request taking and leading the ambiance from mellow jazz to the hottest dance-floor hits, The London Swing and Soul Band is unrivalled in its ability to help manage your wedding or special event from end-to-end – the way YOU want it! Founded by bandleaders Daniel Benisty and Jordan Brown who started playing together as a bass/piano/vocal duo 10 years ago and who remain the core of the band, the band gradually expanded to trio, 4pc, 5pc up to 12 piece. The first spark towards becoming a fully fledged cross genre function band blending electric and eclectic entertainment was the addition of multi-skilled guitarist / singer / entertainer / improviser / rapper, Matt Smith. After the addition of Matt, the band gradually started inviting a variety of brass players and guest singers to compliment the sound. Jordan and Daniel remain very flexible and still perform in duo or trio form, but now, most commonly as a 6 or 7 piece band. Many of the band’s musicians also sing (Daniel – Keys, Matt – Guitar, Jordan – Bass, George – Trombone) and to compliment the vocals, the band often invites guest singers that the musicians have met at the countless stages they have shared up and down the country. To their credit, the The London Swing and Soul Band musicians and singers have played at a huge variety of stages, festivals and venues all around the country – including Bestival, Glastonbury, Hippodrome Leicester Square, Ronnie Scott’s, Vortex, 606 and Pizza Express Soho. The Band are currently preferred supplier for weddings and special events at Heythrop Park, Westfield and The RAC Club. The London Swing and Soul Band prides itself on being perhaps the country’s most flexible, eclectic and varied function bands available. With the choice of a variety of singers and instruments and music in a dozen styles (swing, soul, jazz, reggae, latin, pop, rock, blues, RnB, motown, disco, funk), the London Swing and Soul Band is the perfect choice to wow your guests with variety and rhythm change all night long … An Ideal Choice for a Wedding Band, The London Swing and Soul Band provides an end-to-end service from the use of microphones for speeches to background music, to special requests, ceremony music if required, to first dance, to dinner jazz to the most upbeat hard-hitting dance music, as well as lights, DJ and Disco to keep things going to past midnight. INFLUENCES Influences and Favourites include: James Brown, Frank Sinatra, Adele, Al Green, Amy Winehouse, Billie Holiday, Alicia Keys, Elton John, Elvis Presley, Stevie Wonder, Jeff Buckley, Sam Cooke, Edith Piaf, Radiohead, Michael Jackson, Whitney Houston, Isaac Hayes, Percy Sledge, Muse, Smiths, A-Ha, Puccini, Neil Diamond, Marvin Gaye, Tom Jones, James Brown, Miles Davis, John Coltrane, Dean Martin, Nat King Cole, Louis Armstrong, Nina Simone, Janis Joplin, Ray Charles, Dr John, Oscar Peterson, Duke Ellington, Nirvana, Aretha Franklin, Jacques Brel, Andrea Bocelli, Luciano Pavarotti, Yasmin Levy, Smashing Pumpkins, Buena Vista Social Club, Ofra Haza, Pink Floyd, King Crimson, Led Zeppelin and last but not least The Doors and Jimi Hendrix.

Performance details
We can perform outdoors
We have vehicles we can use to travel to gigs
We require car parking close to venues
We can perform while walking around a venue
Our equipment is PAT tested
We own a PA system
Encore badges
5th Anniversary
This act has been working with Encore for over 5 years
Musicianship
Genres:
Jazz, Swing, Soul, Vintage
See all genres
Types:
Function band, Jazz band, Swing & Jive band, Vintage band
See all types
Event types:
Wedding, Hotel / Restaurant event, Bar / Club / Venue event, Private event, Corporate event, Birthday party
See all event types

SWING / LATIN
Cheek to Cheek
Sway
Besame Mucho
Cuando
Fly me to the moon
Tu vuo fa l'americano
Mambo Italiano
My Baby Just Cares for me
Lady is a Tramp
Via Con Me
Mas Que Nada
Puttin on the Ritz
Charleston
There will never be another you
Quizas
Witchcraft
La Bamba
Wave
All of Me (jazz)
O sole Mio / Its Now or Never
Moondance
Come fly with me
Ive got you under my skin
New York
SOUL / FUNK / MOTOWN
I got you I feel good
Sex Machine
We are Family
I will survive
Superstition
Kiss
Never too much
Proud Mary
Respect
I wish
Lady Marmalade
Signed, Sealed, Delivered
Good Times
Le Freak
All Night Long
For once in my life
I want you back
Staying Alive
Dancing Queen
Long Train Running
Play that Funky Music
Rock with you
Lets Get it On
Let's Stay Together
Valerie
Uptown Funk
Happy
Blurred Lines
Treasure
Moves Like Jagger
Forget you
Cry me a river
Like I love you
Don't you worry child
Please don't stop the music
Locked out of Heaven
Paparazzi
Just the way you are
Crazy
Mercy
Back to Black
We found love
Get Lucky
Rolling in the Deep
Marry you
Thinking out loud
Aint Nobody
Billie Jean
ROCK / POP / 80s
Our House
Johnny Be Goode
November Rain
Paradise City
Photograph
Jailhouse Rock
Take on Me
Lets Dance
Blue Suede Shoes
Sex is on Fire
Rockstar
Use Somebody
Suspicious Minds
Hotel California
Picking up the Pieces
New York
Mustang Sally
Summer of 69
Mr Brightside
Gold
Crazy Little Thing Called Love
Sweet Home Alabama
Mustang Sally
Hit the Road Jack
Wonderwall
Seven Nation Army
Ashes to Ashes
Living on a Prayer
Twist and Shout
Paradise City
Brown eyed Girl
Cant take my eyes off you
Yellow
Clocks
Speed of Sound
Stand by me
Sunny Afternoon
Come on Eileen
Daydream Believer
Everybody wants to rule the world
It must be love
The London Swing and Soul Band

Daniel and his band were excellent. Brilliant musicians who gauged the mood of the party just right. They were extremely pleasant, helpful and very accommodating . My guests and I thought they were brilliant. I cannot recommend them highly enough.

Hi Daniel, Gaby, Harrison and the rest of the incredible band, We just wanted to say a HUGE thank you for performing at our wedding!!! You are honestly the best wedding band we have ever seen!!!! Everyone has been raving about you ever since! I am already trying to get you lined up for my friend's wedding ☺️thank you for taking the time to prepare with Lizzie for our first dance and for performing The Seed with Alex ☺️☺️☺️ Adrian was so chuffed that you reserved Blue Train until he was there. He was also so grateful to Harrison for twinkling away when there was no obligation to and finally to all of you guys for genuinely looking like you had a great time too. We will definitely be coming to see you guys play live in the future! Thanks so much again, Emma and Adrian

RACHEL CAMPBELL – WEDDING AT HOME HOUSE SEPT 2014 “Hi Daniel, Just a quick note to express my sincere thanks for helping to create a BEAUTIFUL wedding evening thanks to you and your band 🙂 The ceremony songs were spectacular and the dinner set was just perfect. Many thanks again xo”