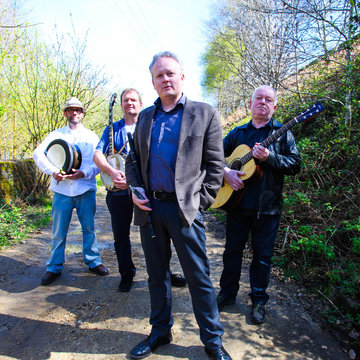 About The House Devils

WHO ARE THE HOUSE DEVILS? MAT WALKLATE Mat Walklate is an accomplished harmonica and flute player who is as much at home playing Irish traditional music as he is the blues. (He won the British Blues Harmonica Championship when he was only twenty-one). As well as being a master of the harmonica, Mat is also a fine singer and uilleann piper. MATT FAHEY Matt Fahey is a superb singer, one of the best interpreters of traditional song on these shores and a skilled, dynamic guitar player, equally adept at accompanying vocals and instrumental music. JONNY HULME Jonny is one of the best bluegrass banjo players this country has ever produced and he's also a dab hand at playing Irish traditional music as well. His spirited, soulful picking gives a great lift to the music. LASZLO PALKO Laszlo is a brilliant percussionist , equally adept on bodhran, cajon, congas and a host of other instruments. Drawing on a huge range of influences, from Irish traditional music to Brazilian Samba, he conveys an irresistible drive and energy to everything he plays on!

A fantastic time had by all. The guys had our wedding guests rocking from the minute they turned up.

Verified
Hugo B, 1 month ago

Brilliant performance! All the Irish classics, with a plenty of charisma thrown in too. Everyone at the event really enjoyed it. They were punctual, got right on with it, and made a sound big enough to be heard on the other side of the River Wear! Very much would recommend.

The band were fantastic, communication with the was quick and easy, responding to my questions very promptly. They arrived with plenty of time to set up, were really nice and then delivered a fantastic set. Would definitely recommend and will book them again.

Verified
Alex B, 1 year ago

We cannot thank you enough for helping make our wedding day so perfect. Everyone absolutely loved your set even all the non Irish guests! The singing was incredible and the music absolutely stunning. All of our song requests were accommodated and played perfectly. Thank you so much

These guys were an amazing addition to our wedding. They really got the party going after dinner and everyone was doing their best Irish dancing. They even let my dad sing with them. Definitely recommend.

Fantastic band and experience from beginning to end! Thank you so much.

Excellent music, very good band and everyone thoroughly enjoyed it. My only slight criticism would be that it was a little bit expensive, but I suppose you get what you pay for, which is a very good band! I would recommend them to anybody!

Brilliant sound! Really went with the mood and flow of our special evening. They managed to get to our remote location and set up their PA on time. They even helped us sort our first dance music when things were going pear shaped! Don't think twice, 10/10 would book again. 🤙

Mat and the band were great. Everyone really enjoyed the music and dancing and they were happy to stand back when my dad took the stage for one of his very long jokes. Thanks

A good time was had by all, thanks to The House Devils, Thank you all very much.

Verified
Linda B, 2 years ago

Absolutely loved them, great musicians, played all Dubliners music. My parents loved it to celebrate there 70th Wedding Anniversary. I would recommend them 5 star. Thank you House Devils x

Everyone totally love the band. They made the evening very special and loved the music. Thank you

Verified
Caitriona B, 2 years ago

Absolutely fantastic. Thanks for making our wedding so good!

Verified
Richard B, 2 years ago

The band were great for our wedding reception- I’d really recommend them. I’d only suggest a name change- it didn’t quite go with the event.

The guys grasped what the event was about, and made sure that they responded with the right mix of music and chat for the occasion! Everyone commented on their musicianship, and the odd lovely comment that they offered on the family event. What fantastic musicians, singers and all-round good blokes!

Verified
Lauren A, 2 years ago

Lovely guys. Would recommend. Thanks

We couldn’t recommend the House Devils more. They honestly made our evening so great and our guests had an absolute blast because of them. The atmosphere they created was second to none and we loved every second. Thank you!!

This band were absolutely incredible. They played at our wedding and had the whole marquee filled with dancing, laughter and fun. Could not have wished for a better band. A perfect choice for our big day. Absolutely superb!

fab music, everyone loved it! Thanks

Verified
Nicola B, 4 years ago

Simply..... they were fantastic!! They made my 50th a night to remember!! I could watch and listen to them over and over again...and I do. I can't thank them enough. I would highly recommend and look forward to seeing them play again soon

.A classy and well-balanced mix of tunes and songs that boasts accomplished musicianship throughout.

A superb band, really made our night!

Both band and caller were superb! Very professional!