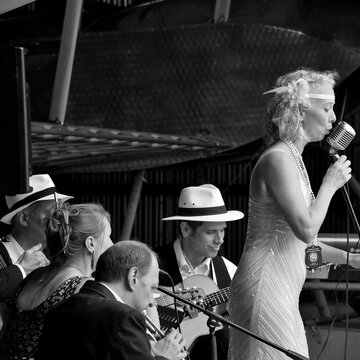 About The Hot Jazz Vagabonds

THE HOT JAZZ VAGABONDS Airlie Scott- vocals, Shirley Smart- cello, Peter Michaels- guitar, David Ahmed- guitar Established London-based vagabond jazz musicians present a hot jazz sandwich of french chanson, gypsy jazz tunes, early vintage swing, Latin tunes and exciting originals. Led by engaging Jazz Vocalist Airlie this is a new exciting crossover gypsy jazz band with a unique selling point! A gypsy jazz style quartet with an improvising cellist who plays the cello both like a double bass and as a soloing instrument. Add to that two fantastic collaborative guitarists both with their own unique sound, some beautiful French chanson, swinging hot gypsy jazz standards, exciting originals and you have a recipe for something rather wonderful! Versatile Singer and Actress Airlie plays regularly with her bands Pronto Swing and Pronto Jazz. They recently had a successful run at the Edinburgh Fringe with their show "Swing from the Movies". She sings regularly with various London based jazz and blues combos including Minnie and the Moochers, the Mardi Gras Jazz Band, the Julian Cowie Quartet and others. Cellist and composer, Shirley Smart is a jazz/world music specialist and has been described as "one of the best improvising cellists in the UK" (The JazzMann). She performs regularly with her own jazz trio, with her critically acclaimed world music band "Melange", runs the "Beyond Cello" course for the London Cello Society and works in many other projects and as a session musician. Peter Michaels has a unique performance style influenced by his classical and flamenco guitar training combined with contemporary and jazz influences. He is involved in a number of long-term projects featuring his compositions and arrangements, including London’s Brazilian Balkan band Pocket Caravan, North African/mediterranean band Melange, Bis-bas, the Matzoh Boys and Bhavini. Guitarist David Ahmed plays in the Hotclub style of Django Reinhardt and the Gypsies,fiery and melodic. Emotionalism is the essence of his style; it is acoustic, aural and non-academic. A Londoner, David plays the Gypsy Jazz circuit, jazz clubs, swing dances and vintage festivals.

Aint Misbehavin'
After You've Gone
Alice In Wonderland
All of Me
Autumn Leaves
Bei Mir Bist Du Schon
Beyond The Sea
Blue Drag
Blue Skies
Button Up Your Overcoat (Dixieland Tunes)
Chega De Saudade (No More Blues)
Corcovado
Dance Me To The End Of Love
Exactly Like You (Dixieland Tunes)
Fly Me to the Moon
God Bless The Child
Goody-Goody
Honeysuckle Rose
I Can't Give You Anything But Love
I Could Write a Book
I Love Paris
I'll See You In My Dreams
It Had to Be You
It's Only a Paper Moon
I Wanna Be Like You
I've Got You Under My Skin
J'attendrai
Joseph Joseph
Lady Be Good (Oh)
The Look of Love
Love (Walt Disney's Robin Hood)
L.OV.E
Lullaby of Birdland
Mean to Me
Moon River
Ménilmontant
My Funny Valentine
A Nightingale Sang in Berkeley Square
The Nearness of You
Night And Day
On the Sunny Side of the Street
Petit Fleur
Please Don't Talk About Me
Que Reste-t-il de Nos Amours
Somebody Loves Me
Sweet Georgia Brown
S'Wonderful
Sympathique- Pink Martini Cover
The Very Thought of You
Them There Eyes
There Will Never Be Another You
This Can't Be Love
Trust In Me
What a Difference A Day Made
You'd Be So Nice to Come Home To

The band opened up with Ella’s classic ‘Blue Skies’, showcasing Airlie’s wonderful vocals, following with ‘Button Up Your Overcoat’. Then there was another standard made famous by Ella, ‘Goody-Goody’, taken at a jolly clip. Dean Martin’s ‘Please Don&#39;t Talk About Me When I’m Gone’, took the pace down and gave us a warm bluesy vibe, featuring Dave Ahmed’s intricate guitar work. This was followed by two, French Chanson numbers: ‘Petit Fleur’ and ‘Que Reste-t-il de Nos Amours’, demonstrating Airlie’s vocal flexibility, range and command of the language. Other highlights of the evening included ‘Blue Drag’ three more French Chanson numbers: ‘Menilmontant’ ‘Sympathique’ and ‘J&#39;attendrai’, and some excellent swinging standards such as ‘Exactly Like You and - Lady Be Good (we would have danced if there had been any room, but the house was packed). ‘Night And Day’ gave guitarist Peter Michaels a chance to shine, while ‘Bei Mir Bist Du Schon’ and ‘Beyond The Sea’ enabled cellist Shirley Smart to show her instrumental virtuosity. The band closed their final set with ‘See You In My Dreams’, with the audience’s cheers and clapping echoing to the rafters. The Hot Jazz Vagabonds are back at The Bull’s Head on 28th June 2018.