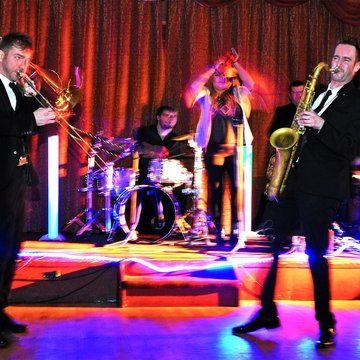 The Hornzmen are a rocking soulful funky bluesy brass and horn based party band that perform ripping versions of hit music as only they can!
3 of 5 photos
Soul & Motown band
North Shields
Public liability insurance of £10 million

The Hornzmen were created in 2008 by Jason Holcomb and quickly became highly sought after for their dynamic performances, especially in the corporate and private event scene. The group is comprised of some of the finest horn and brass players in the US and the UK. They have been in high demand as individual performers as well as members of a larger horn section, performing with groups such as Michael Grimm (winner of America’s Got Talent), Frankie Valli and The Four Seasons, The Zowie Bowie Big Band, and Dominic Allen (formerly of the rock group Foreigner). The group combines funk, soul, rock, and jazz into an exciting blend, and has put together a list of songs that can only be described as hugely entertaining. Since its conception the group has maintained very busy corporate performance schedule having played to audiences all over the US and in the UK. They have performed in LA, Las Vegas, New York, London, Chicago, and many other. The Hornzmen have played in most of the major casinos in Las Vegas, including Mandalay Bay, The Venetian, The Bellagio, and Aria at City Center to name a few. They've been honoured to have performed with and opened for Blake Sheldon, Glenn Fry and Joe Walsh, and Jerry Lee Lewis. The group can perform with a 5 to 10 piece band, as a duo, or with a DJ scratching behind them adding a unique contemporary texture to the performance. The Hornzmen have also performed and recorded with international superstar Matt Goss. In September 2011 they recorded a live performance with Matt at Capitol Records in Los Angeles and have performed two sold out shows at The Royal Albert Hall in London. The Hornzmen have relocated their base of operations to The UK and have begun performing for international audiences throughout Europe.

Superstition by Stevie Wonder
September by Earth Wind and Fire
25 or 6 to 4 by Chicago
I wish by Stevie Wonder
Soul Man by Sam and Dave
Sweet Home Chicago as performed by The Blues Brothers
Shining Star by Earth Wind and Fire
Jump, Jive, and Wail by Louis Prima
With a little help from my friends as performed by Joe Cocker
Signed, Sealed, Delivered by Stevie Wonder
God Bless The Child as performed by Blood, Sweat, and Tears
Billie Jean by Michael Jackson
Its Your Thing by The Isley Brothers
Knock on Wood by Eddie Floyd and Steve Cropper
American Woman by Lenny Kravitz
Addicted to Love by Robert Palmer
Son of a Preacher Man by Dusty Springfield
Play That Funky Music by Wild Cherry
Sledge Hammer by Peter Gabriel
Chameleon by Herbie Hancock
Higher ground
God only knows
Creep
Lady marmalade
I want you back
Customer questions

The Hornzmen are an entirely instrumental act.

We have two formats, one with The Hornzmen as a duo with backing tracks and the other working with a DJ.

Please get in touch as soon as possible and we'll see if we can accommodate the new timings.

our set up time is about 90 minutes.

We would be happy to chat with you about the set list!

The PA is absolutely included in the quote!

All prices include:The Hornzmen duo performing with professionally recorded backing tracks
Packages
Corporate Event3 musicians
We provide The Hornzmen with DJ act for three 30 minute sets with specially arranged set including a "Mardi Gras" themed parade through the venue. We will also MC the event with introductions of VIPs, engaging with the attendees, and performing "play-on" music for any guests who take the stage to address the attendees.
£1800

You guys are amazing!!!