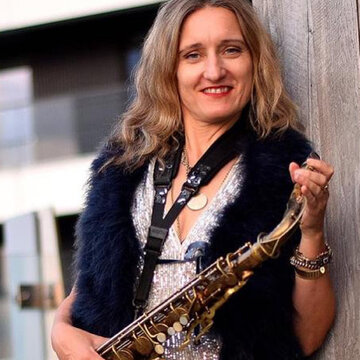 About Get Getz Jazz Band

Katy is a lyrical saxophonist with a rich tone, who performs in London on the jazz and world music scene. Katy's performing highlights have been collaborations with great jazz musicians, Anj Perin, Dave Whitford, Rachel Jenkins, Count Indigo, Richard Luck and many more. In venues such as The South Bank Centre, Leighton House, Conway Hall and The Vortex, for The Sun, recently including The BBC with Les Zoings. horn & brass Fanfare band for Royal Academy artist Bob and Roberta Smith. Chris Jerome a dynamic and versatile keyboard player, pianist , composer who has performed and recorded extensively with a multitude of artists. He was a member of the UK's premier saxophonist Courtney Pine's band for eight years, performing at major venues and festivals all over the world as well as featuring on his last two albums. He has also been part of legendary singer Tom Jones band performing in numerous television shows across Europe and has performed on several TV shows with Lionel Ritchie. We perform as a duo, trio or quartet adding drums & bass, plus a quintet adding trumpeter/vocals. Other artists with whom he has collaborated include Osibisa, Jazz Jamaica Allstars, Hugh Masekela, Maxi Jazz, Faithless with The Soul Food Cafe. Beverley Knight, Jamelia, Sister Sledge, Imagination, Rose Royce, Womack and Womack and many others.

Yes, we start as a duo and can go up to as many people as you like

that's fine as long a it's the same day! If we have a problem we can try and fix it.

Yes we can plug an iPod in in-between

30 mins, but usually we give ourselves an hour

Yes you can choose jazz numbers you like, we know too many to mention.

Sure, just give us some notice.

Fantastic! Everyone thoroughly enjoyed the music.

Fantastic! Everyone thoroughly enjoyed the music.

Katy came to play at our art gallery opening and it was very inviting and people loved her sound, we will be booking her again.

I had my 40th birthday party and always loved the sound of the saxophone and being so close to the musicians was amazing, they really played for us and made a great impression on all the guests

I wanted something special for my 50th and Getz Getz lead by Katy and Sue really melted my heart. What a great sound and amazing musicians and they were so down to earth & entertaining.

Thank you so much for the event in September. I would love to attend the Friday Late and Live Music on Friday 8th September 2017 at 6:30pm, because I am Katy Jungmann's fan. She is a wonderful saxophonist.

Chris & Katy have a great sound, really full and so musical and when the bass player join in for the 2nd part it was amazing how it transformed even more. So glad I went to see them.

The best female saxophonist I heard.