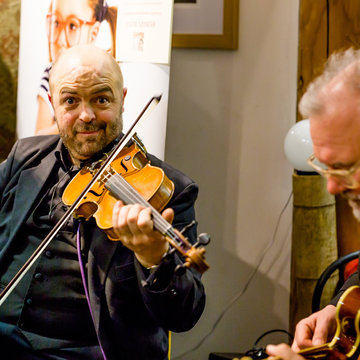 About The Billy Thompson Duo/Trio

When a more low key or mellow sound is required, Billy very much enjoys playing in a duo or trio setting with guitarists and pianists.
3 of 4 photos
Jazz duo
Bala
Public liability insurance of £10 million
Verified profile

After graduating from the Royal Welsh College of Music & Drama in 1995, Billy moved to London to further study violin technique with professor of violin from the London College of Music, Dona Lee Croft. After a year of further study, Billy joined a band for an extensive contract at the Royal Abjar Hotel in Dubai. Upon returning to Wales, Billy got further into playing Jazz through playing a lot with guitarist Andy Maule. Performances ranged from performing numerous times at the Brecon Jazz Festival, working for Live Music Now, TV appearances and many many functions from weddings to hotel residencies to book launches. Their residency at the Four Bars at Sandy's led to the duo finally recording an album in 1997. The album is available from all digital music sellers... Andy Maule took ill with Pancreatitis which led to Billy needing to find other players to fill in for Andy at their Celtic Manor Resort residency. Billy subsequently played with many other pianists and guitarists in a duo setting to continue this residency. Billy was finalist in the Young Jazz Musician of the Year in both 1996 and 1998. His performances can be seen online. This led to numerous things such as a 4 album, 10 year stint with the incredible Barbara Thompson's Paraphernalia. This included numerous tours of the UK and Europe which included week long residencies at Ronnie Scott's, London. Since moving to North Wales, Billy has continued playing with high calibre musicians and performs mostly with guitarist Andy Mackenzie along with his 5-piece Gypsy Jazz group Billy Thompson Gypsy Style. Billy also performs with pianists and recorded an album with the keyboard player from Barbara Thompson's Paraphernalia, Peter Lemer in 2005. Both the duo album with Andy Maule and the duo album with Peter Lemer are available on all digital sellers including Spotify. There is a link on this profile. There is a review on this profile of a recent performance Billy and Andy (Mackenzie) did for the book launch of Let Me Lie by the international best seller Clare Mackintosh.

HC
How G
4 years ago

How cool is this guy? Billy Thompson - Improvising Violinist is my 10-year-old's guitar teacher, and a fantastic violinist. He and his colleague Andy played at the launch and absolutely made my evening. You can check out his stuff on the web...

Promotional Musical Soiree We booked Billy Thompson for the launch of our new Lifestyle store in Ruthin - so glad we did! The music was fabulous, musicians, passionate and the music made the evening. Everyone enjoyed it and are still talking about it. Will definitely be booking him again and have no hesitation in highly recommending him. Talented - Professional and a Genuine Happy Person. Thank you, Billy.