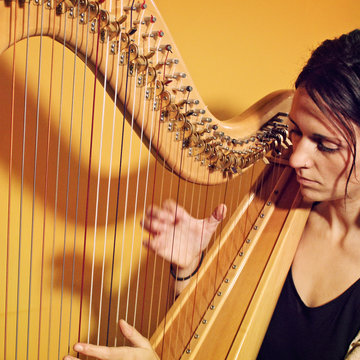 Tamsin is a multi-instrumentalist, composer and teacher based in Bristol, UK. With roots firmly in the folk music of the British Isles, her field of expertise has extended to incorporate the musics of Eastern Europe, the Mediterranean, North Africa and the Middle East as well as Western Classical and Jazz idioms. Tamsin currently plays in original folk-world fusion project Solana, as well as in various ceilidh outfits in the South West. She also performs solo as a harpist, and has recently collaborated with oud players and percussionists in Cairo, Egypt. Tamsin composes primarily on the flute, harp and accordion and her work has been described as cinematic and mesmerising.

Standard Prices
All prices include:I can provide amplification for my harp, suitable for small-medium spaces.

Tamsin made a special effort to learn quite an obscure traditional piece for our party, and her harp arrangement was beautiful. Thank you!