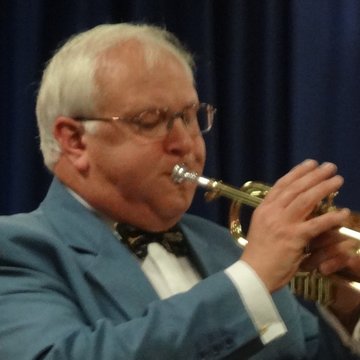 Steve King is a well-known figure on the Midlands musical scene. Like many brass players he spent his formative years in the Brass Band world before forming the Steve King Big Band in his late teens. In his early twenties he also began a seven year stint as lead trumpet with the nationally acclaimed Midland Youth Jazz Orchestra. With these and other aggregations he has toured extensively in this country and in Europe, appearing at the major Jazz Festivals together with broadcasting many times on Radio and Television. He has appeared with many of the greats in the U.K. including John Dankworth, Kenny Baker, Don Lusher, George Chisholm and Kathy Stobart, together with international stars such as Barney Kessel, Al Cohn and Karin Krog. He has always been in demand as a lead trumpet and featured soloist with bands too numerous to mention here, and as a Charter member of the Jazz Education Network works on an ad hoc basis with bands across the Midlands together with being engaged as musical director with a rehearsal band based at Birmingham University. Steve concentrates most of his time these days on running his own highly successful big band which is in constant demand for high quality engagements of all kinds. Amazingly, he finds time to arrange music and, in addition to featuring them with his own band, his charts can be found in band books throughout the country, together with being used in the floor shows of many cruise liners.

“Absolutely. This is a really popular request.. If you'd like a DJ service via our PA after the final set until the venue closes, we provide this for an additional £100.”

“We usually set up about 1 to 1.5 hours before the performance time

If a song isn't included in our song list there may still be a chance we already know it. If there is a special song you'd like us to learn we are happy to do this for you. There is a fee of £100 for this service to take into account rehearsal times etc. ”

Everyone thought you were wonderful. Perfect for the occasion.

I don't know how many fans you had in Kettering before playing at our wedding, but we can assure you that their ranks have been swelled enormously by your performance.

Fabulous band, received many compliments on our choice of band! Had everyone on the floor all night!