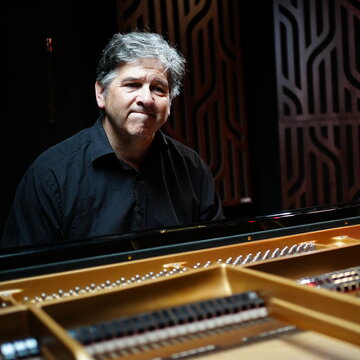 3 of 11 photos
Accordionist
London
Public liability insurance of £10 million
Verified profile
I am an accordionist, pianist, and musical comedian. I will be performing at the Pheasantry, Chelsea, on weds 26th Feb,

Stephen has a First Class Honours BA in Music from Christ Church College, Canterbury, Kent.   He received a Scholarship in Composition for the Screen at the National Film & TV School, Beaconsfield and studied Piano at the Guildhall School of Music & Drama Part-Time Studies with Dr Frank May.   He has been a pianist/accordionist for many theatre shows, such as 'Three Men in A Boat' at the Theatre Royal, York, and 'The Madness of George Dubya' at the Arts Theatre; Stephen was a resident pianist at Kettners Restaurant, Soho, from 2002-2008, and has played at many functions and hotels such as the West Lodge Park Hotel, Cockfosters. He has entertained as a musical comedian at many conferences and private functions; his one man comedy show, Ludvig's Van, got Four Stars at the Edinburgh Fringe. He is a professional actor and is represented by Paola Farino. He has composed many scores for TV and cinema, including the 2013 Sundance Festival hit documentary,  'The Moo Man', ' 'The Hunt' for BBC2 (Cultural Prix Italia 1999), two documentaries on Princess Diana for ITV, the Grierson Award-nominated 'The 2000 Year Old Computer' for the BBC (2013), 'The Real Catherine Cookson' (Yorkshire TV), 'Charlotte: A Royal at War' for Luxembourg, British & American broadcast.   He trained in Composing for Film at the National Film & Television School, Beaconsfield, England. He has also composed stage musicals, including the British Library's 'Alice Through the Looking-Glass’, a Critics Choice in The Times for its Hampstead production in 2001. Reviews: "a gorgeous musical score of violin and cello by Stephen Daltry — breathtaking in its simplicity, beauty and effectiveness.” (Ken Russell, 30th Oct 2009, The Times, review of 'The Lost World of Mr Hardy')    Stephen Daltry’s attractive chamber score... captures the surroundings’ pastoral beauty"  (Dennis Harvey in Variety, Feb 4th 2013, review of 'The Moo Man’)

That is not a problem. I'm very flexible. I can extend or lessen my time accordion to your budget (excuse the pun!)

Yes I can provide background music through my speaker system between sets.

I generally require only half an hour. If I am bringing my own keyboard and am also doing comedy then I like 45mins.

Yes: if there are particular favourites of yours that are not on the list then I am happy to learn them, if you give me enough warning in advance! But if it involves alot of pieces that require a good amount of prep then I will need to charge more.

The warmth of the tone of my playing on accordion, and on piano, and my choice of repertoire, and my ease and flexibility on the day, eg needing to play 'a happy birthday' song spontaneously.

Two one man shows at the Pheasantry, Chelsea in Oct and Dec 2018, and playing piano and accordion for two documentaries on ITV on Princess Diana, and accordion for BBC Scotland's feature film 'Of Fish and Foe'.

Verified
Will, 1 month ago

Thanks Stephen for your great performance!

Verified
Gina B, 3 months ago

Very happy with Stephen, my father enjoyed his birthday music! Thank you so much for making his day!! X

Stephan was great. Punctual, helpful, willing to dress as Santa(!) and great on the piano of course

Stephen was a great professional that made our party really magical. We had a very particular brief (surprise narrowboat trip) and during the planning he was always responding promptly and accommodating. He played beautifully and was a pleasure to chat during the breaks. Highly recommended!

Stephen was an absolute pleasure to work with from the initial enquiry through to the day itself. Highly professional, very quick to respond to emails and flexible to work with our needs for the booking. The music itself was excellent and our customers very much enjoyed the experience. Perfect.

Stephen was great, all our guests mentioned how lovely it was to have an accordionist at the event. Stephen was professional, high quality and very personable. We would recommend him!

We were very satisfied. His cooperation and understanding was very good. We are thinking of having him in future events. Some of the keys were a bit high pitched for th group made up of mainly over 60s

Stephen was very punctual and delightfully played Italian music for us as requested! Everyone danced and sang along to the accordian it was such good fun! Mum really was taken by surprise and thoroughly enjoyed every moment! I would book Stephen again ! Also thank you to James for helping me use the web site I have recommended encore to my friends and the social club I belong to. Thank you again

Stephen was great – his music was lovely and he kept to the tone of the event which was fantastic. He was very polite and well presented.

We really enjoyed it and you really made the night.

Before the event I emailed Stephen and he was very willing to play the style of music I was looking for. On the day he arrived promptly and was very friendly and calming, as I was getting a little stressed organising the party it was great that he was able to just play without any further direction. His playing was immaculate but also very expressive, I was very pleased, and all the guests commented on how much they enjoyed him there. A real treat. Thank you Stephen (10 / 10)

it was a pleasure to have you play for us for the evening. Dear Steve, Everyone enjoyed your music and you really did fit into the party and ambience, you were exactly what we wanted. Thank you once again for looking after us at such short notice too.

Stephen was first class, arrived early and stayed as late as he could given he had another gig across the country that evening. My Nan loved him and still talks about the music at her birthday. Stephen made the effort to learn a couple of her favourite tunes and was just brilliant on the day. 5*

As a personal friend and colleague of Stephen's , I cannot fault him as a pianist. His style of playing is effortless, especially when playing Jazz , swing and most American songbook standards. Stephen really gives everything when he is playing and most importantly he is a real true gentlemen and will always be reliable'.

What a super pianist and accordion player. We booked Stephen for our wedding reception and we were not disappointed, he was simply fantastic. All our family and friends couldn't stop raving about how wonderful, warm and intimate his music was and how it set the scene for the rest of our wedding day. Stephens natural talent along with his clear passion was something we all shall never forget. Listening to his wonderful melodic tunes on his piano and accordion and bringing smiles to all our guests, especially us, we all wanted more and didn't want him to leave. What more is there to say apart from, Thankyou Stephen for making our wedding day a memorable one.