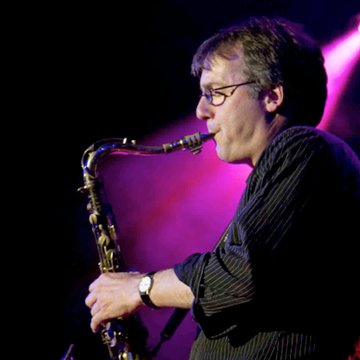 Simon performs with all the saxophones and is ideal for Weddings, parties and corporate functions. He is also a member of The Manfreds.
Saxophonist
Thatcham
Public liability insurance of £10 million

Looking back at Simon Currie’s incredible list of credits, it seems a completely natural progression to find him playing alongside THE MANFREDS. From 1983-88 he was a member of The National Youth Jazz Orchestra (NYJO). This enabled him to share the concert platform with the likes of GEORGE SHEARING, MEL TORMÉ, PEGGY LEE, ROSEMARY CLOONEY, SHORTY ROGERS, KAY STARR, BROOK BENTON, AL MARTINO, JOHN WILLIAMS, JIMMY WITHERSPOON, VIC DAMONE and JOHNNY DANKWORTH to name but a few. His NYJO pedigree gained him invaluable experience and opened up several new doors. By now he was working in different bands and orchestras, and in great demand wherever a brass section was needed. His time spent with JOHNNY HOWARD, RAY McVAY, BERT KAEMPFERT, JOE LOSS, GLENN and HERB MILLER enabled him to travel extensively, hone his craft, and broaden his musical range. During stints playing at The Monte Carlo Casino in the South of France from 1988-90, he found himself backing musical legends as diverse as GEORGE BENSON, STEVIE WONDER, DONNA SUMMER, LIZA MINELLI, THE THREE DEGREES, SAMMY DAVIES JNR, THE TEMPTATIONS, THE FOUR TOPS and JERRY LEWIS. Simon is a relatively rare breed of musician, one who is equally at home playing flute, clarinet, soprano, alto, tenor or baritone sax. He also composes, arranges, does regular session work, and even finds the time to front his own jazz band! Simon has released two solo albums entitled Monochrome To Colour and Time Lapse. He has also written 2 albums with Mike Hugg (Founder of Manfred Mann) Sanctuary and Walking Through Tomorrow. In 2001 Simon joined PAUL JONES AND THE MANFREDS (ex MANFRED MANN), and has toured with guest artists COLIN BLUNSTONE, CHRIS FARLOWE, LONG JOHN BALDRY, PAUL YOUNG, ALLAN PRICE, PP ARNOLD, ZOOT MONEY and CLIFF BENNET

‘Happy’-Pharrel Williams
‘Fields of Gold’-Sting
Mr.Saxobeat- Alexandera Stan
"pick up the Pieces" Average White Band
"Just the Two of us" Bill Withers
"Lilly was Here" Candy Dolfer
Street life
Georgia
Lovely Day
Saving all my love
Born to make you happy
G Bop
Moon Dance
Arthur’s Theme
Baker St
Round Midnight
Watermelon man
Theme from taxi
Snakes
Feel lick Makin love
Endless love
If you don’t know me by know
Night in Tunisia
Songbird
Falling into you
Everything I do
I believe I can fly
Never Ever
Tears in heaven
2 become 1
Torn
Words
Without you
Killing me softly
One day I will fly away
Wind beneath my wings
Wonderful tonight
Everybody
I will always love you
Moving on up
Lets groove
You sexy thing
Theme from Starsky and Hutch
Pick up the Pieces
September
Fields of Gold
Lilly was Here
Wine Light
Endless Love
Have I Told you lately
Jazz Standards
Take Five
A Night in Tunisia
Stranger on the Shore
Doxy
St Thomas
There will never be Another You
Stella by Starlight
Body and Soul
What is this thing Called Love
The Song is you
I’ll Remember April
Cherokee
Getting Sentimental over you
Flying home
Perdido
Fly Me To the moon
One note Samba
Lullaby of Bird land
Round Midnight
Days of wine and Roses
Have you met Miss Jones
September in the Rain
Autumn in New York
I Cover the Water Front
Love For Sale
Namely You
September Song
My Foolish Heart
I Can’t Get Started
A Foggy Day
It might as well be spring
My Favourite Things
Summertime
Satin Doll
Solitude
I let a Song out of my Heart
Mood Indigo
In a Sentimental Mood
Take The a Train
I Could Write a Book
Our Love is here to Stay
My Funny Valentine
Jazz Standards Cont……
Sweat Geogria Brown
Lady be Good
Bye Bye Blackbird
All of Me
Come Fly With Me
Mack The Knife
New York
Night and Day
You Make Me Feel so Young
Lady is a tramp
Classical Flute
Ave Maria
Air on a ‘G’ String
Habanera
Jupiter
Ode To Joy
Rondo in D Minor
Spring
Horn Pipe
Swan Lake.Cannon in d
Romance
Morning from Peer Gynt
The Blue Danube
Mozart No 40
Green Sleeves

We’ve listened to Simon on a number of occasions playing blues, jazz, funk and pop, with consummate skill and professionalism. He combines his technical ability with splendid musicianship to produce a great listening experience. Highly,highly recommended for all kinds of music occasions.

I saw simon Currie play at Gawsworth Hall, and he is a fantastic saxophonist and a great performer. He made the evening very special.

I have been honoured to see The Manfreds at Gawsworth Hall every year for the past 4 years....Simon Currie's saxophone playing brings the Manfreds music to life. It gives their already fantastic songs that real bluesy feel. A very talented saxophonist that you would never tire of listening to. Thanks Catherine x x

He is a fantastic saxophonist, and works with me in The Manfreds". Paul Jones BBC Radio 2