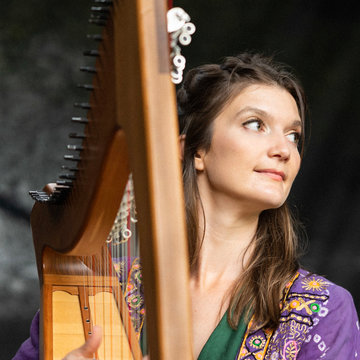 Siannie is an experienced and enchanting clarsach (Scottish Harp) player based in Edinburgh.
Celtic Harpist
Edinburgh

Hailing from Ross Shire in the Highlands, Siannie Moodie is an expressive and accomplished clarsach player. She is deeply rooted in the Scottish folk and Gaelic music from this region, and learned from some of the countries greatest tradition bearers including Alison Kinnaird and Bill Taylor. She has recently been accepted onto the prestigious Live Music Now scheme and is looking forward top playing at a diverse range of venues throughout Scotland in the upcoming months. Since moving to Edinburgh, Siannie has been at the heart of the contemporary folk and traditional music scene. She continues to engage audiences and develop her clarsach playing and repertoire at ceilidhs, festivals, music sessions, weddings, concerts and more. Recently she has travelled to Europe with a host of renowned musicians playing Scottish and Irish music, while embracing Europe's diverse and musical variety. As well as performing, Siannie is passionate about teaching clarsach and facilitating music in the community. She began teaching in 2009 for Feis Rois, part of the Feisean movement that celebrates the music connected with the Gaelic language. Since then, she has taken part in a variety of projects, including theatre workshops with the Highland Shakespeare Company, Christina Stewart's Kist of Dreams Tour and the successful "SongCircle" Scottish music sessions for children.

Celtic Harpists in the UK
Ceilidh Callers in the UK