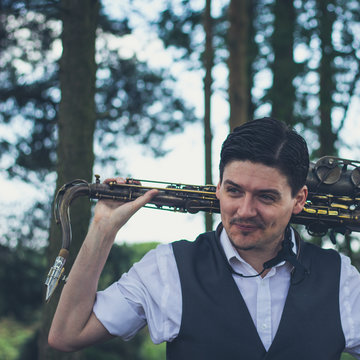 Scott picked up his first saxophone at the age of 12 and, as a result of graduating through KYJO and becoming Musical Director of IJO, has been performing in professional bands for 20 years. His most notable achievements to date include performing regularly with The Jive Aces (the UK's number one swing and jive band, and semi-finalists of Britain's Got Talent 2012) and Cassidy Janson (playing the lead role in Beautiful, the musical, on the West End). Not only that, but Scott has been invited to perform with The Jive Aces in the Caribbean and to audition for a performance slot with Scot Bradlee's Post Modern Jukebox. Most recently, Scott has also been the saxophonist for official Level 42 tribute band, Never 42. No stranger to the famed and talented, Scott has performed on the same stage as Stacy Francis (finalist on the first season of the US X Factor), Analiza Ching (semi-finalist on Britain's Got Talent 2012), Mike Hatchard (a regular performer on BBC Radio) and The Twin Swing (renowned vintage dance act). Scott has received standing ovations at Ronnie Scott's Jazz Club, London, on several occasions and has performed to crowds upwards of 2,500, at prestigious events and venues, including, but not limited to:  Ronnie Scott's Jazz Club, London  The Tower of London, London  IAS Anniversary Event, East Grinstead  Kinsale Jazz Fringe Festival, Kinsale  Marlborough Jazz Festival, Marlborough  The Hideaway Cafe, Streatham  Portsmouth Guildhall, Portsmouth  War and Peace Revival, Folkestone  Summertime Swing, East Grinstead Scott has recorded over 50 videos for SaxCoUk and has received 11.05m views. In addition, Scott has even featured on The Jive Aces' music video for their original song "Lovin' Life", from 00:01:27s, which has received nearly 38k views, to date.

Drop me a message as soon as you can, and I will always try my best to be flexible to accommodate your requirements.

Not a problem - I can provide an iPod service between my sets.

I usually ask for 1 to 1.5 hours to set up and prepare for a performance.

Of course I am happy to weave your favourite numbers into a set list - I have 20 years of experience in putting together performances so will always highlight if I know that a particular combination won't flow.

Yes - just give me a shout. Pending the number of songs you require me to learn fresh, there may be a small surcharge to cover rehearsal time etc.

My energy and ability to read the tone. Whether you need something to sit in the background or something to get people up on their feet - I promise I'll deliver!

I have been privileged to perform at some fantastic venues, including Tower of London and Ronnie Scott's infamous jazz club.

I have a very eclectic taste in music, though my passion lies in jazz. Michael Brecker and George Albright are two of favourite saxophonists. Snarky Puppy are up there in my top fave bands.

Standard Prices
All prices include:PA equipment Travel (up to 30 miles) Personalised set list Consultation
NEW!Virtual services
Personalised Music Message
Book me to create a unique music video for you to send to a friend as a gift. This could be a birthday message, first dance song for a wedding anniversary, or just your friend's favourite song to cheer them up.
£15

Scott brings his music to life in a way that engages a diverse audience. His technical ability is outstanding and coupled with a dynamic personality it is easy to be totally consumed in the moment. It would be a travesty not to go and see him in action as he will not disappoint the most discerning music lover. World class so please don't miss the opportunity.

Scott Jenkins is a well accomplished, talented and versatile musician. Having watched a number of performances by him I highly recommend him as a reliable musician and performer who would deliver a quality show. I would not hesitate to book him or watch him performing his art. Highly recommended.

Scott Jenkins is not only a fantastic saxophonist with all the best chops for the job but reliable and a genuine all round top bloke! I would recommend him for any position requiring a saxophonist. Hire him today!

Ropetackle A, 6 years ago

The D'artagnan of Swing...