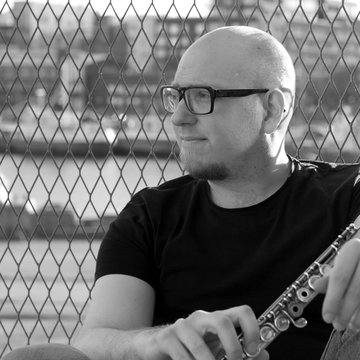 Sami Junnonen is a unique international flute soloist from Finland. An artist beyond the ultimate devotion: He lives for the flute.
3 of 4 photos
Flautist
Helsinki of Finland

Sami Junnonen (b. 1977 in Tampere, Finland) has established a versatile international career by performing as a flute soloist with a wide repertoire from early music to contemporary works. Junnonen collaborates frequently with some of the most significant composers of our time. His 2012 Debut Recital at the Helsinki Music Centre received outstanding reviews. Junnonen has worked as a principal flutist in various orchestras, e.g. the Hong Kong Sinfonietta and the Auckland Philharmonia Orchestra. He has also worked as a performance teacher in flute and chamber music at the University of Auckland in New Zealand. In addition to SibaRecords, Junnonen releases music through Alba Records. He has recorded for the Finnish Broadcasting Company, Radio Television Hong Kong, and Radio New Zealand, as well as for the labels Sony BMG, Bayerische Rundfunk, Naxos, and Ondine. Junnonen is a multiple prize winner in international music competitions, and his artistic work has been sponsored by several cultural institutions. Junnonen has been academically trained at the Sibelius Academy, the Conservatoire national musique et danse de Lyon, the Royal Danish Academy of Music, and numerous masterclasses. He holds a Master of Music with Distinction from the Sibelius Academy, completed in 2008. Junnonen performs on 24-carat and 14-carat gold flutes, handcrafted by the Muramatsu Flute MFG. Co., Ltd.

Junnonen keeps impressing his audience with his great talent, technically sovereign, and his intensity and longing for musical expression. He keeps exploring the repertoire and possibilities on the flute, and is showing a remarkable mastery of his instrument throughout the whole range of expression, dynamics, pitch, rhythms.

This flutist owns the best qualities: sound, musicality, technique, style for the whole repertoire including baroque, classical, romantic, and contemporary music. He is an extraordinary interpreter.

Consummate Finnish flautist Sami Junnonen, a major player during the festival’s earlier events, in Bach’s A major Partita, Debussy’s Syrinx and his own, staggering arrangement of the great Ciaccona from the D minor Partita, all the violin’s passing notes sounding rich and rare on the golden flute.