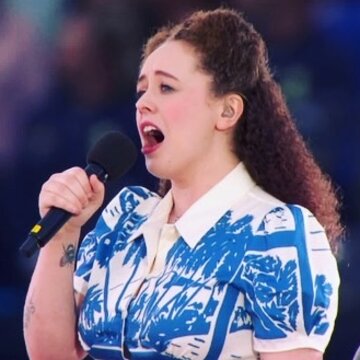 Singer of the National Anthem at the opening ceremony of the Commonwealth Games in Birmingham 2022.

Mezzo-Soprano Samantha Oxborough is a recent Royal Birmingham Conservatoire graduate with a Bachelor of Music in Vocal Studies with a First class Honours and a post graduate certificate. She was a 2019/2020 at the National Opera Studio as a young artist. She has just sung the National Anthem at the Commonwealth Games opening ceremony. She studies with Christine Cairns. Samantha has been involved in the Conservatoire's operas since her arrival. She proudly sang in the chorus of The Dialogues Des Carmelites directed by Michael Barry and her full main roles include Métella – La Vie Parisienne – Offenbach,  Cherubino - The Marriage of Figaro, Maurya - Riders to the Sea, and Patricia in Michael Wolters world premier of Ava's Wedding. She has also taken part in the Conservatoire's Opera Scenes as Carmen, Octavian (Der Rosenkavalier), Quickly (Falstaff), Lucretia (Rape of Lucretia) and Suzuki (Madame Butterfly).  Samantha was awarded The Snt. Clare Barfield Memorial Bowl for Operatic Distinction received from Julian Lloyd Webber in June 2016 and has just been awarded first place in the Cecil Drew Oratorio prize, Edward Brooks Lieder prize, the Conservatoire Singing Prize, joint first in the Ashleyan Opera prize and second place in the Doris Newton Music club prize. She was also a finalist in the Leamington prize and the THSH prize.  In 2015, chosen by Head of Department Julian Pike, Samantha represented the Conservatoire at the Kathleen Ferrier Bursary. Competing against students from all the major UK Conservatoire's, she was the only female finalist and attained third place. In September 2017, Samantha proudly sang as a soloist in a concert in Kineton organised by Roderick Williams for the Woman's institute. She also sang as Zerlina in the duet 'La Ci Darem' - Mozart with Roderick as Don Giovanni.  On the same day she won the Geraint Morris Award. As a result Samantha was a soloist at the Festival of Massed Choirs in the Royal Albert Hall, London in May 2018. Samantha is also a committed member of the Conservatoire Folk Ensemble, a 50 piece professional touring band in which she sings and plays her euphonium.

I will always be flexible with timings changes. This is your special day and I am there to make it run as smothly as possibly.

Just give me a space and I'm ready to go!

Which ever song you want, you will get.

No worries at all. All I ask is a weeks notice.

Standard Prices
NEW!Virtual services
Personalised Music Message
Book me to create a unique music video for you to send to a friend as a gift. This could be a birthday message, first dance song for a wedding anniversary, or just your friend's favourite song to cheer them up.
£15
Samantha

I really dont have the words to express our gratitude to Samantha. She made such a sad event so beautiful. Samantha was soloist at my mother's funeral. Samantha was amazing everyone was absolutely blown away. Samantha Thank you !!!! X

Absolutely Beautiful. Such a special voice, I could listen to Samantha all day. Our mom Josie would have been proud of the occasion. Such a professional lady flawless.

PA
Patricia A
1 year ago

Samantha was perfect with a magnificent voice and truly made the occasion very special.She aimed to please right from day one. I would have no hesitation in recommending her.

Absolutely amazing! Would recommend Samantha every time. Thank you so much. Just perfect!

Samantha Oxborough as Maurya both sang and acted her role consummately--the outstanding performance of the evening ..... Oxborough is perfect for this role--quality of evenness of tone, good diction and dynamic range ............... the closing scene is riveting

But the drama pivots on their mother Maurya sung by Samantha Oxborough. An artist in her early twenties who managed not only to embody a woman with a lifetime's harsh experience but whose voice had a core of savage intensity and a glow that her defiant monologues convinced you that you were hearing a masterpiece.