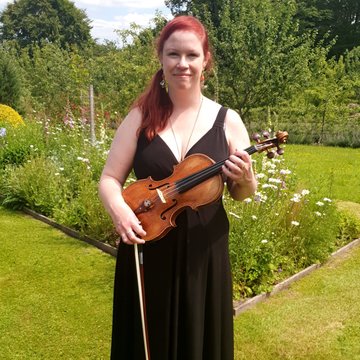 Samantha is a freelance violinist based in Stratford upon Avon. She trained at Birmingham Conservatoire and gained an MMus
3 of 6 photos
Violinist
Stratford-upon-Avon
Public liability insurance of £10 million

Samantha is a freelance violinist classically trained at Birmingham Conservatoire to Masters level. She is also a specialist in folk/gyspy/klezmer styles with a wide-ranging performing career. She performs with several orchestras and chamber groups and works regularly at the Royal Shakespeare Company. Since 2012 she has appeared in numerous productions and has often appeared on stage and in costume playing from memory. Some of these performances have been broadcast live to cinemas and subsequently released on DVD. Samantha was a founding member of seven-piece cinematic folk septet the Old Dance School, now know as the Fair Rain. With them she toured the UK and Europe in theatres, arts centres and festivals and released three studio albums and one live album. The band have won critical acclaim and have been featured several times on BBC Radio 2. She performed with them until 2015. Samantha has a busy freelance career combining theatre, orchestral and chamber work, session recording and also performing with ceilidh bands and folk groups.

Samantha played with a small group of musicians for our wedding in August 2019. She was so helpful and brilliant, and worked really well with the others (some of whom she had never met before) - and sounded excellent! Our guests loved the music too, and it really brought our church service to life - we can’t thank her enough!

Samantha has played at several events I have managed at the Royal Shakespeare Company and has always been highly professional as well as an excellent musician. I would recommend her without hesitation

Recording of a string quartet composition for a website: Samantha is a long time friend, colleague and fellow musician. Last summer Samantha played one of the violin parts in a string quartet I had written so it could be recorded in a studio for a website. Samantha was professional , hard working and committed throughout performing with both people she had worked with before and people she hadn’t. The end result being exactly what I was looking for, I would highly recommend Samantha as a performer. Alexander S Cottrell