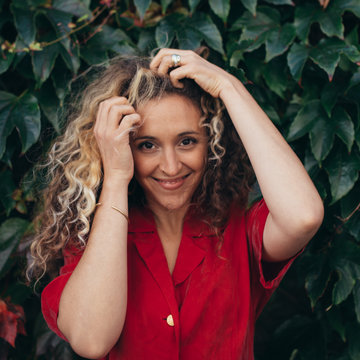 Samantha Lindo is a Bristol based UK Jazz and Soul artist with a voice that is ‘hauntingly flawless’, ‘having crowds mesmerised within seconds’ (Bristol Post). Coined as Etta James meets Kate Tempest, Nitelife magazine described how ‘weaving poetry’ and ‘beautiful lyricism through her songs’, Samantha presents some ‘very raw and real issues about love, life and the human condition’. Part of the wave of emerging UK Jazz artists such as Celeste, Ezra Collective and Yasmin Lacey, her single ‘Turn & Leave’ was launched alongside James Morrison at Sofar Sounds & Amnesty International’s global event ‘Give a Home’ and she performed it as featured artist at the national TEDx event ‘Daring to Disrupt’ in front of a live audience at Colston Hall and of over 1M online. ‘Turn & Leave’ has been featured on Spotify playlists curated by Saffron Records - Bristol’s all female record label - and Sofar Sounds City Spotlight - a mix of the Sofar Team’s favourite artists over the last few years. It also appeared in a short film, ‘About’, by Brixton based Authentive productions and, most notably, was chosen by BBC Introducing and BBC 6 Music to feature nationally on the BBC Sounds The Hotlist this November. She was recently featured in The Guardian’s photographic essay telling the story behind her new single ‘Lips’, released last week at her sell out show in Bristol. The track celebrates all the unlikely women stepping up into activism to defend our earth. Despite the seriousness of the subject, she describes the song itself as a “banging soul tune” with a hip-hop beat, eighties synth and tight female harmonies to set it all off. Having set up all-female arts collective Girls, Girls, Girls, with whom she performed at Union Chapel and featured in Oh Comely magazine’s issue on sisterhood, Lindo was invited to sing & speak in the Museum of London's exhibition ‘Votes for Women’ last year which inspired her into activism. Her next single ‘Underside’ will be launched in February at Rough Trade Bristol and the Servant Jazz Quarters in London, as well at The Listening Room at St George’s Bristol. She will be discussing the inspiration behind the track in an artists Q&A at the launch supported by Time to Change, a charity aimed at destigmatizing talking about mental health. ‘Underside’ shows off Lindo’s vocal delivery that holds the possibility for both depth and an effortless soaring, it fits comfortably in the rising UK jazz scene with Tom Misch-like guitar lines. The track is lined up to be remixed by influential Bristol producer DJ Bunjy, the force behind the legendary hip-hop and reggae act Laid Blak, and 2020 will see some epic collaborative releases from the pair as well as three solo singles, an EP and a UK tour from Samantha. Lindo’s special relationship with her jazz loving grandfather (one of the first Jamaican Anglican priests in the UK) helped nurture her love of the vocal greats and backed by her new band of ‘exceptionally talented’ musicians, Nitelife Online concluded that they ‘can well imagine Samantha shooting up to the top with an alarming speed – eyes peeled for this girl!’

We will try our best to be flexible, just let us know ASAP.

Yes of course! Just let us know the vibe you would like to create, We love playing DJ!

About an hour please.

We can definitely have a chat about it and see what we can do,

Yes, we bring everything.

3 tunes are included in the price and if you would like extra then it is just £30 for the rehearsal time.

Clients love my voice and my ability to be both fun and have a party but also soulful and emotional. Everyone says that my shows have really touched them and are struck and moved by my voice. I also like to find out about the clients and add in stories into my song introductions to make them feel really special and celebrated.

A diverse range of spaces from huge capacity venues like Colston Hall, The London Palladium, medium to large like Hootenanny Brixton and The Glee Club Birmingham, Union Chapel, London, small exclusive venues such as Battersea Power Station, living room gigs in Notting Hill, and then wonderful community events like churches to my grandma’s carehome!

TED Talks at Colston Hall Bristol with a 2K capacity and 1M online.

We booked Samantha to come and sing at mine and my husband’s 60th birthday party in May. All our friends were absolutely blown away! She sang some classic souls songs that we all new, including a very beautiful reworked version of my favourite song as well as her own material. People are still talking about it now I highly recommend both her and her husband Dylan who is one of the most professional keys players we have ever seen. Thank you Samantha & Dylan.

Samantha and her band performed my charity Beloved’s birthday celebration this year. She performed a very moving set and the sound was incredible. We were so glad to have her and her songs and her voice to help celebrate and express the work we do.

Sam and Dylan performed at our house for a supper club for about thirty of our friends last Christmas. They used our grand piano and sang Etta James’s ‘Rather Go Blind’, and Lauren Hill’s ‘Killing me Softly’ as well as their own tracks and beautiful Christmas songs too. Everyone commented on how great Sam’s voice was. It was such a treat to have live music at the end of the evening, everyone went home singing!

I hired Samantha to perform at a corporate event I organised for our clients and potential partners in Bristol to discuss issues of diversity in the workplace. Sam and her band performed beautifully, creating just the right atmosphere for what our event required. Her voice was amazing, she was highly professional and also spoke eloquently on the subject, holding the whole event wonderfully.

When planning the music for our Supper Club event we wanted to find someone who would give a performance of warmth and intimacy with a high level of quality thrown in - Samantha proved to be the perfect choice. She held the audience in the palm of her hand and treated us to a beautifully written and performed set including her own songs as well as a cover. Many of our guests said it was the highlight of their evening and was the perfect accompaniment to the delicious food.

I helped organise the annual TEDx Bristol event at Colston Hall in 2017 and we had Samantha perform as one of our featured artists. She had the whole auditorium captivated. It felt both intimate and expansive at the same time and her songs were so relatable and meaningful. It was an amazing performance.

I booked Samantha to sing at the launch event of one of my recent products. Her and her band were very professional and helped provide the perfect atmosphere for the event that I wanted to create. They looked and sounded great and I would thoroughly recommend Samantha to anyone looking for a talented musician to provide entertainment and atmosphere at a professional.

We found Samantha recommended by someone on Rock My Wedding and we were not disappointed! Her voice was amazing and she had a lovely vintage feel which fitted with the vibe of our wedding perfectly. We were able to request a few songs especially for myself and my partner which just made it so special to us. Her voice was the first thing we heard as we entered the hall and it kicked off the celebrations perfectly!

We had the privilege of Samantha singing at our wedding drinks reception and it was amazing! She played beautiful soul, pop and jazz songs - Florence and the Machine, Ed Sheeran and the Lumineers - all songs that we knew and loved as well as jazz standards. It just made the whole thing extra special, and created the relaxed ambiance we were looking for. A huge thank you to Sam for making our day extra special x

Samantha performed at my mother’s private dinner party in Bath and had the room in the palm of her hand. People were crying, laughing and everything in between. We loved having her. Here voice is just gorgeous and it was one of the best nights we have ever had.

I first saw Samantha perform at a Sofar Sounds show in Mayfair, London. I then invited Samantha and her partner Dylan to play a beautiful, intimate set of music at my home in Notting Hill for myself and a group of friends. Samantha sang soulful original songs as well as fun covers that we couldn’t help but join in with. She introduced each song in a such moving way but that also made us laugh. I loved it so much that I also hired her to play at my birthday dinner party at Battersea Power Station where she interpreted a number of covers that I had requested in her own unique way. It was wonderful, we all ended getting up and dancing and I even did a duet! It was the most special and memorable way to celebrate my birthday.

Erica B, 2 years ago

Samantha recently played at our charity event at Christ Church in Clifton. Her voice was just incredible and her songs were so moving. She explained each one and linked them to the theme of the event. Her band are just so talented and everyone said how brilliant it was. Thank you Samantha and band.

I organised the annual TEDx event at Colston Hall, Bristol in 2017 and we had Samantha perform as one of our featured artists. She had the whole auditorium captivated. It felt both intimate and expansive at the same time and her songs were really relatable and meaningful. It was an amazing performance.

Singers in the UK
Singers in Bath
Singers in Wells
Singers in Newport
Singers in Gwent
Singers in Cardiff
Company
Discover
Download
Join us on
© Encore Technologies, Ltd.
Crafted with bagels and in London