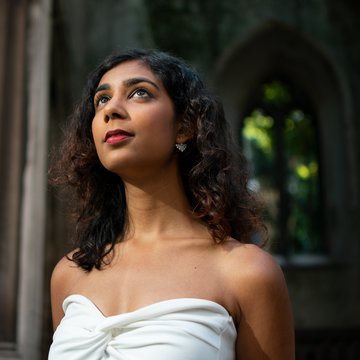 Saachi Sen is a Mumbai-born, London-grown indie-pop singer/songwriter. A past Resident Artist at the famed Camden Roundhouse, her writing has gained high level recognition, achieving PRS for Music’s Lynsey de Paul Prize, and winning places in Roundhouse/EMI’s ’30-30’ project album and the Young Songwriters Competition UK. She gigs regularly in London’s emerging music circuit, with highlights from the past year including Pride in London (playing to 10,000 people in Trafalgar Square!), Roundhouse Rising festival, Frank Turner’s Lost Evenings II, and her first Sofar Sounds show at their Hackney HQ. She was also featured at King’s Cross’ summer concert series the Cubitt Sessions, and The Southbank Centre’s seminal South Asian arts festival, Alchemy. Saachi’s solo songs draw influences from classic songwriters like Norah Jones and Don Mclean, with pure, melodic vocal lines and a focus on meaningful lyrics. Her first solo single ‘Tethered’ was released in August 2018, and is about letting go of the things that keep you from following your dreams. Her upcoming tracks have been recorded at Spotify Secret Genius and Abbey Road studios, to be released in Autumn 2019.

If you were to book me in the evening I would tend to put aside the whole evening for you - though do just let me know in case your timings are subject to change!

This isn't something I'd normally do as I generally observe that clients like to choose their own music, though am happy to discuss based on your needs!

I'd prefer to set up about an hour before performing, though generally can do so in less than half an hour.

I would prefer a PA system, mike stand and direct input for my guitar to all be available at a venue. In exceptional circumstances I may be able to provide some equipment but this would incur an extra fee given the general difficulty of transportation.

I generally get great feedback from people that love my voice. When I perform originals, people often comment to say they love my songs, particularly my lyrics.

Definitely Pride in London on the massive stage in Trafalgar Square. I came runner up on 2019's Pride's Got Talent competition, and got to perform in front of about 10,000 people!

Karen A, 3 years ago

Your voice is just extraordinary

Voice of an angel and great original work... had the room spellbound