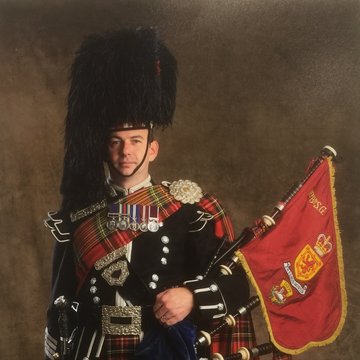 I am an award winning piper of 30 years experience based in Edinburgh. I'm currently the Pipe Major at the Army School of Bagpipe Music.
Bagpiper
Edinburgh
Public liability insurance of £5 million
Verified profile

Hello and thanks for visiting my page. I started playing bagpipes 30 years ago at the age of 8, winning my first juvenile contest 8 months later. I won my first under 18 world championship at the age of 12 and retained that title for the following 3 years. I still compete successfully in professional solo piping contests. I have had a 20 year career as a piper and more recently Pipe Major of the world famous 1st Battalion Scots Guards. This has taken me all over the world including musical tours of the United States of America, Japan, and Italy among many others. I have played at Buckingham Palace and Windsor Castle for the Royal family and visiting heads of state, and I've also played at hundreds of smaller functions in Scotland and further afield. Performing with other ensembles is something I enjoy. I recently performed with the Orchestra Filarmonica di Lucca at the Musikverein in Vienna which was a great privilege. Weddings and Burns functions are something I have a great deal of experience in. I am able to perform the poem "address to a Haggis" as well as the music that accompanies it.

Ross was perfect for our wedding day. Even went the extra mile to move his arrangements to accommodate us. Would recommend him to anyone looking for a piper.

Absolutely perfect. Ross played bringing dignity to the occasion. We are forever grateful. Thank you. We wish you continuing success and remain confident that future clients will, like us, treasure the contribution, you give to mark the occasion as special. David & Gill

Ross was absolutely professional and his bagpipe playing was of the highest caliber as was his personality. He looked a million dollars and was a wonderful ambassador for his Scottish regiment. Thank you Ross

Ross was brilliant start to finish. Great communication. Excellent performer and even when the weather drastically.changed he powered on. Definitely recommend!

If I had the option to give 10 stars for Ross, I would do. Not only was Ross an absolute delight to communicate with, he was also a joy to meet and truly made our day. We booked Ross to play at my father's birthday breakfast which was an intimate affair and Ross was truly fantastic. His playing skills was second to none but what truly impressed and left a lasting impression on us was his genuine persona and going above and beyond just playing for us. He was gracious, let us take a ton of pictures and made the whole time we had with him truly interactive. My Dad said it was the best birthday surprise he could ever ask for and he is still talking about it almost two weeks later. We will definitely be in touch with Ross again, He is truly brilliant!! : )