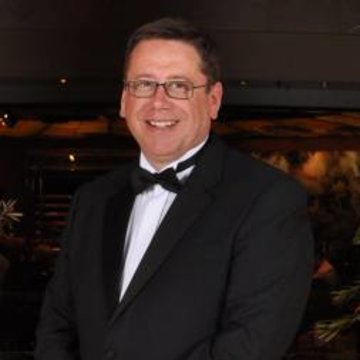 Robert is a professional musician, Musical Director, playing piano, keyboards and organ, playing either as a solo artist or with bands.
3 of 5 photos
Pianist
Doncaster

Robert has been working in the music industry for over 30 years gaining his Graduate Diploma in Light Music at Leeds College of Music. Since then, he has worked with stars such as Darren Day, Frankie Howard, Bernie Flint, Jimmy Cricket and Frankie Vaughn... to name but a few. When Robert worked in pantomime with Davy Jones, star of "The Monkees" TV. show, it led to a call from Mr Jones asking him to be his personal Musical Director which took him on the QE2 to New York and to The Lakeside Country Club and a TV appearance on "Pebble Mill at One." Robert has worked in Great Yarmouth and Bridlington with the 'Black and White Minstrel Show, In Jersey with the 'Stuart Gillies Show’, and a tour with the legendary Band Leader and Drummer Eric Delaney. Nine years were spent as Musical Director with Jimmy Cricket touring up and down the country with his show and the last five years has been spent cruising many countries around the world with Royal Caribbean and P & O Cruises to places such as The Caribbean, Russia, the Mediterranean and South America. Recently Robert has been working as a duo with his wife performing for Masonic dances, birthday parties and wedding receptions. Regular recent work includes Brittania Hotel Leeds, Warners Thoresby Hall playing for dancing and the Holiday inn Stratford playing easy listening in the restaurant.

4.7 out of 5
5 verified reviews
Satisfaction

VA
Victoria A
5 months ago

Robert was amazing , he played for our wedding on the 18th of June . Not a note out of place so so good couldn’t recommend him enough !!!!! Thankyou again Robert !

Thank you Victoria, it was a lovely service and really enjoyed playing the old church organ.

Robert arrived in time and is very friendly, personable and professional. He provided fantastic entertainment at my Dad’s 90th birthday celebration and all the guests were really pleased with his selection of music. He kindly allowed guest to sing which was greatly appreciated by the party goers. I can highly recommend Robert and it was a real pleasure having him play keyboard at my Dad’s special party. I would definitely have Robert play keyboard at any future function I hold and will recommend to other friends and family. Thank you Robert for such a memorable and fantastic evening!

JJ
Jean J
4 years ago, for a Concert in South Elmsall

Robert played a lovely selection of music - some of our choosing, some of his and some of the residents' requests. Most popular with the older people were his medley of war-time songs and some Frank Sinatra tunes whereas we marginally younger folk enjoyed the Beatles medley. The organ concert made a very pleasant occupation for a cold, early-winter afternoon. We would highly recommend Robert Baker for such a function and maybe next time we'll invite his wife along to come and sing with/for the residents, too.

KP
Kelvin P
4 years ago, for a Cruise in Arcadia

Robert is a jovial chap with a good sense of humour. He takes pride in his playing and his laid back style rubs off on other musicians working with him, creating a nice, relaxed atmosphere on & off stage.