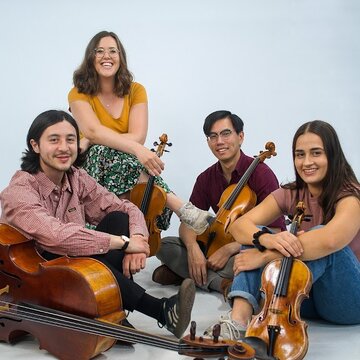 Friends joined through their love of chamber music, the Resol String Quartet formed in the Autumn of 2018 at the Royal Conservatoire of Scotland, with a vision to make classical music more inclusive both in the present and for the future. In a constant pursuit for excellence, these young artists share their joy of music making and act as ambassadors for chamber music, keeping it alive in today’s society. The group feel just as at home in education and care settings as they do on the concert platform and strive to blend all this work together. In the concert hall they approach their interpretations from a historically informed perspective, bringing a unique take on repertoire from all eras. Recently, in May 2021, the quartet were awarded both the First Prize, and Audience Prize in the CAVATINA Competition at the Wigmore Hall, representing the Royal Conservatoire of Scotland. In the same year, they made their Perth Concert Hall debut, were named as one of Chamber Music Scotland’s ‘One’s to Watch’ and were accepted to work with Live Music Now Scotland. They also appeared live on BBC Radio Scotland’s ‘Classics Unwrapped’. In 2022 they made their Conway Hall debut as part of their historic 'Sunday Concert Series'. Recently the quartet were selected as a Britten Pears Young Artist for the year 2022-23. In 2020, the quartet were privileged to open the Royal Conservatoire of Scotland, Rosin Chamber Festival, alongside the world-renowned Brodsky String Quartet. In the same year, the quartet won First Prize in the Royal Conservatoire of Scotland Mabel Glover String Quartet Competition, were awarded the Mary D Adams prize for chamber music. The ensemble were invited to perform for the Brunton Chamber Music Recital Series in August 2020 with an immediate re-invitation for November 2021. The ensemble have also performed at the avant-garde venue Pianodrome in Edinburgh, and run two of their own concert tours in Sussex (September 2021) and the West of Scotland (November- December 2021). The West of Scotland tour was in collaboration with classical Saxophonist Richard Scholfield and brought a varied programme of original arrangements to rural island communities. This tour was funded by the National Lottery through Creative Scotland. Education is an important aspect of the quartet’s work. Their recent concert tours saw them visit 6 schools in the communities they visited. Resol Quartet have received masterclasses and coaching from: Richard Ireland, Joseph Swenson, Donald Grant, Guillaume Sutre, Peter Salaff, Shelia Browne, Greg Lawson, the Brodsky Quartet, David Watkin, and Manchester Collective.

Standard Prices
4 musicians
All prices include:A full string quartet, set up, and consultations with the quartet about the music you would like performed.
Resol String Quartet

NE
Netta E
3 years ago, for a Charity event in 10 Dumbreck Rd

The Resol String Quartet performed in the Virtuosi Recital, hosted by Artists for Mary's Meals in the Mackintosh Music Room of the House for an Art Lover, Glasgow, on 28th October 2019. Their playing charmed the audience and fittingly graced the elegant surroundings. They played with passion and dedication, and much thought went into the introduction of the music to the audience. They clearly wanted the audience to understand their music and to join with them in the journey within each piece. Their love for their medium penetrated their performance and moved the listeners. They left the Music Room to rapturous applause, and we hope they will come back next year to delight us again.