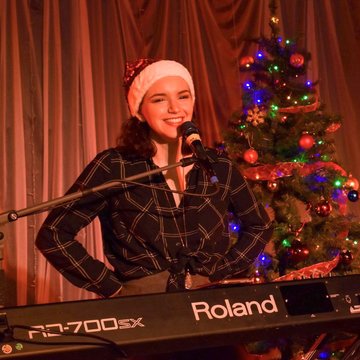 A Glasgow-based singing multi-instrumentalist from New York City with years of performance experience all over the world!
3 of 11 photos
Singing pianist
Glasgow

Polina Senderova is a Music Director and Multi-instrumentalist from New York City. From ages 6 to 18, she studied classical piano and violin at Manhattan School of Music Precollege. She then attended Northwestern University, where she got a Bachelor’s Degree from Medill School of Journalism, and spent much of her time involved with musical activities on campus. Her final year of college, she got hired by Howl at the Moon, a national Dueling Pianos chain, with which, over the next few years, she worked all over the country studying how to sing, play drums and bass guitar, and perform hundreds of songs on multiple instruments. After that, she took to the seas, working as a singing pianist on Holland America Line cruise ships, as part of a popular show called “Billboard Onboard.” Since then, she has performed both all over the country and abroad, and has music directed a number of projects in the NYC area. She is currently getting her Master’s in Musical Theatre Music Direction from the Royal Conservatoire of Scotland in Glasgow.

Yes, I would be happy to play on a piano that is already at the venue.

Yes, I am happy to learn specific song requests that are special to you or your party for your event. Just send me a list in advance :)

Very talented and she loves what she does. It shows in her music and attitude.

Polina is an excellent musician and entertainer!