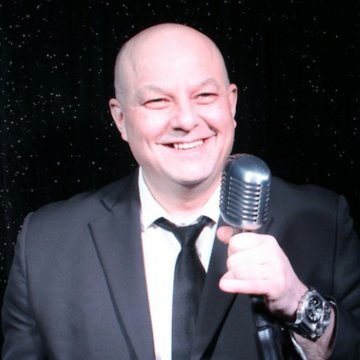 Peter smith performs some of his favourite songs from the golden age of swing, with classic Soul n Motown hits thrown in for good measure.
3 of 8 photos
Singer
Rochdale
Public liability insurance of £10 million

With songs from legends such as Frank Sinatra, Dean Martin, Bobby Darin, Nat King Cole and more recently Michael Buble (just to name a few) Peter gives us his interpretation of some of the best hits from a time when music was life! If you're looking for a little more, Peter can follow this up with some classic Soul n Motown and floor fillers from the decades to give you a party to remember. Sit back and enjoy! Peter has been an entertainer for almost 30 years having started out in the business as a roadie for his Father and Uncle’s mobile disco, learning the art of entertainment from the tender age of 17. His first ‘gig’ was at the ripe old age of 19 when he was asked to sing at a family member's Silver Wedding Anniversary. His thoughts afterwards...a bit nervy but, wow, when do I get to do that again! The answer was the following week when he signed with a local Agent, the late Tony Thomas, who immediately saw his potential and invited him to hone his skills at a private entertainment school that Tony ran for a select few. These lessons soon paid off as by the age of 21, in a field where the customer was demanding more and more, Peter was seen as one of the top Entertainers in the Agency, which itself, was one of the biggest in the UK. Several years passed during which Peter earned his spurs played the length and breadth of the UK, even being asked to perform in Europe, During this time, he became the entertainer of choice for many of the top hotels in and around Manchester including the Victoria & Albert, where he worked for almost 6 years, The Lowry, Piccadilly Hotel, Portland Hotel and The Britannia Hotel, gaining a reputation as an ultra professional entertainer who always made sure that he did and gave everything to make the evening be the best that it could be. Available throughout the UK for Weddings, Private Parties, Public Events and Corporate Functions.

I would usually suggest 2 x 45 minute sets, although I'm happy to offer other options (3 x 30 mins or 1 x 90 mins) if you prefer...whatever best suits the timings of your event. I can also provide background music before, in between and after the sets if you wish.

I will bring my pa system, stage lighting and stage backdrop and am happy for you to suggest any favourite songs that you may have.

You can call me to change

Standard Prices
All prices include:I will bring my pa system, stage lighting and stage backdrop and am happy for you to suggest any favourite songs that you may have.
Peter smith

LN
Liam N
2 years ago, for a Bar / Club / Venue event in Liverpool

just a quick email to say you made my dad very happy last night , and everyone else were impressed with your performance, so thank you very much and all the best for the future , regards , liam

CW
Claire W
2 years ago, for a Birthday party in Essex

I hope you are well. I just wanted to drop you a message to thank you for entertaining us and our guests at Chris's 50th birthhday party on Saturday evening. You really nailed setting the perfect scene and created a buzz which helped the party flow! There was something for evenyone and can't believe you managed to get my Dad up dancing. I've been contacted by lots of guests to tell mw how much they enjoyed th evening and particularly your act, I just wanted to share this with you. I will be in touch for any future family celebrations. Best wishes Claire and Chris

Singers in the UK
Singers in Oldham
Singers in Bury
Singers in Manchester
Singers in Salford
Singers in Bolton
Customer Service
Discover
Company
As seen on
© Encore Technologies, Ltd.
Crafted with bagels and in London