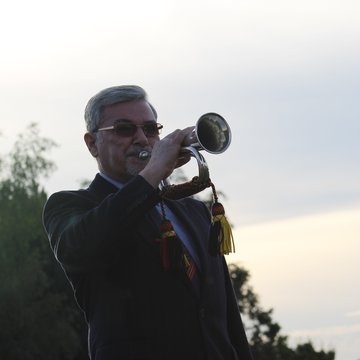 A versatile musician from a military backround. Playing everything from Big Band to Baroque on Trumpet and (yes!) Tuba. Bands available too.
3 of 6 photos
Trumpeter
Norwich
Public liability insurance of £2 million

I am a versatile musician from a military background, being a member of the Royal Artillery Band from 1959 - 1969 playing trumpet and 'cello. The band was twice, personally requested, to play for the queen in the grounds of Buckingham Palace and made several appearances at Military Tattoos e.g Edinburgh - Earls Court and county shows etc. During that time I studied for twelve months at Kneller Hall, the Royal Military School of Music. As a member of the fanfare team I played for an historical TV show about WW2 presented by General Sir Brian Horrocks. I have sounded the Last Post and Reveille at gatherings all around the British Army of the Rhine and UK, most importantly at Winchester - Salisbury and Norwich Cathedrals for not only Military Parades but also, since leaving the service, for: The Royal British Legion, The Royal Artillery Association, The Royal Anglians, The Far Eastern Prisoner of War Association, The Spirit of Coltishall Association and The Royal Air Force Association. I have played in Dance Bands around the Norwich area for many years, laterly with the Pavilion Big Band covering music from the late 20's to the 60's and more. The Tuba has introduced yet another branch of music, playing in the Norwich City Concert Band and my Brass Quintet, The Wensum Valley Brass Quintet. The quintet can cover all occasions from funerals, church services, weddings, banquets and 'official' openings etc. etc. - we play music from the Baroque to the Beatles and more! The line up of instrumentation for the quintet is, two Trumpets - French Horn - Trombone and Tuba.

All versions of The Last Post: Reveille: Sunset: Bugle and Trumpet Calls of the UK Forces.
Trumpet Fanfares and Flourishes.
Customer questions

A sensitive approach and performance. Guidance on procedures and music.

Specifically Bugle/Trumpet Soundings of the Last Post etc.: During my military career I performed in Germany, France, Denmark and Belgium as well as the UK. I have performed at Winchester, Salisbury and Norwich Cathedrals and various Bases and locations around the county. I have been contracted to play for many Military Associations.

With enough notice I can be flexible regarding all timing. Please make contact as soon as possible to make any alteration to the arrangements.

Not really applicable in these circumstances.

Normally just a couple of minutes for discussions with you and the 'leader' of the occasion.

Not really applicable in these circumstances.

Yes! Just let me have a two minute 'warm up' and I'm ready.

Peter was able to accommodate our needs at very short notice and brought a sombre but uplifting moment to the whole funeral.

21/12/16 "Hello Wensum Valley Brass A special "Thank You" from the Thorpe Branch of The Royal British Legion! I am sure that we all improved our "brass" knowledge and we really enjoyed your musical offerings. Please keep us informed of your future concerts. Regards Marian

PW
Private A
6 years ago

Many thanks to you and the Quintet for setting the scene so well at our celebration on Saturday . It was very much appreciated and the right choice of music for the occasion. Looking forward to seeing you in September, Bernard