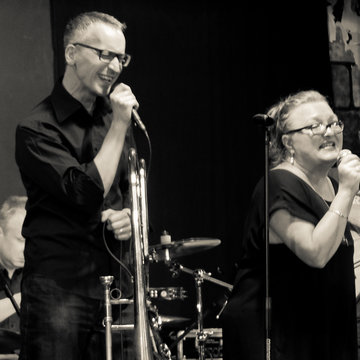 Party Manifesto played their first gig in 1998 and was originally known as Mainly South - a band formed by work colleagues, they quickly developed a strong word of mouth reputation in and around the Stratford area as a great party band. We gigged fairly solidly in pubs, parties, weddings and corporate functions for several years in before taking a few years off. We re-formed in 2014 after a break to play a rather special and exclusive private party…. and decided to keep going. We lost a bass player, but gained a new one, and gained a sax player into the bargain. Since then, we have played parties and weddings by invitation at every available opportunity! Call us now to book us for your special event. Party Manifesto are: Anna Stamp – Lead Vocals Kate Barry – Sax Mark Boorman – Guitar and Vocals Steve Levitt – Keyboards, Trombone and Lead Vocals Neil Corner – Bass Pete Barry – Drums

Not a problem - just let us know!

Our set list is on rotation - depending on what you want we can usually cover it for you!

In our performances and sets there is something for everyone - covering decades and decades of great music.

We've performed in pubs, clubs, festivals, weddings and marquees all over Warwickshire, the Cotswolds, Derby and Cheshire

Now that's a leading question! Our singer loves soul, our keyboard player loves his funk, and our guitarist loves his indie Britpop. Don't ask the drummer!

A few party in the park type events - great fun - great crowds of up to 3000 people!

The best band we have ever had!

The band were brilliant, I haven't danced that much in years, well done organisers 😁

We have booked PArty Manifesto for 2 years in a row for our community party. Our villagers comments speak for themselves!

Can't thank you enough for last night, it was amazing!! So many great comments coming through. Free next year?

Great night and good fun dancing in the rain!!! Well done to all, the band were brilliant!

We had such a good time - but a little stiff this morning , not used to all that dancing, also appear to be living in a house full of glitter!

Thanks so much for playing at our wedding - everyone had a great time and it made our special day perfect!