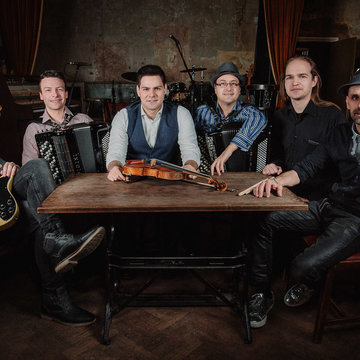 Paprika unites traditional Eastern European, Balkan, Gypsy and Classical Music. The band have toured extensively across Europe, Australia, New Zealand and Japan, and have featured at WOMAD festivals in the UK, Spain, Canary Islands and Abu Dhabi. Highlights have included concerts at the Purcell Room (Southbank Centre), Royal Albert Hall, Sydney Opera House, Glastonbury Festival, Edinburgh Fringe and EXIT festival. The band is focusing on bringing rare and lost traditional Balkan music back to life. In 2012 the band appeared on BBC World on 3 and Radio 5 Live and was also featured in Channel 4's 'Come Dine With Me'. Highlights in 2013 include performances at the Kings Place London, Bradford Festival as well as at the Cheltenham Music Festival, where they were reviewed as one of the top 7 'Spine-tingling Music Festival moments': "Paprika – hot and fiery lived up to their name, giving us a whirlwind tour of the Balkan countries, each piece becoming a firm favourite before being superseded by the next. Toe-tappingly good, with the audience whooping and cheering from the first note." Cheltenham Festival 2013 "I've enjoyed their album-also called Paprika-for a while now, and often played tracks from it on my BBC 6 music radio show. But I still wasn't prepared for the energy and brilliance of their live show-if you see any gigs coming up I'd be sure to hot foot your way to the front row-these guys will never let you down- the effect they had on the great mix of Ladbroke Grove locals was a treat to see- they had everyone jumping with joy. A must see." Cerys Matthews

Up to one hour

We are usually limited because we are amplified and use cables.

Possibly, depending on a song

IT
Igor T
7 months ago

An excellent band, they were great fun and really rocked our NYE house party. I am now looking to potentially book them for a Wedding next Summer.

B
BBC
8 years ago

They had everyone jumping with joy. A must see." Cerys Matthews