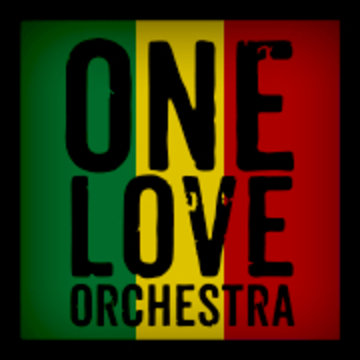 About One Love Orchestra

ONE LOVE ORCHESTRA Bob Marley was one of the most prolific entertainers of the century. He took the sound of reggae, out of the cultural confines of the Caribbean island of Jamaica and made it into a mainstream, global sensation. He trailblazed a path that not only made him great but paved the way for another great musical talent to follow in his footsteps. There have been many artists and bands that have been inspired by the musical brilliance of Bob Marley and One Love Orchestra is the best band doing it in the UK right now. Based in London, One Love Orchestra is a multi-instrumental tribute band, specializing in covering music from the legendary Bob Marley and the Wailers. ​ Founded in 2010, the band have rapidly made a name for themselves and grown to be not just a band that does Bob Marley tributes, but one that works with various reggae artists performing live throughout Europe and the UK. The band was founded by Marcin Bobkowski who is also the musical director and lead guitarist. One Love Orchestra is made from the greatest reggae musicians from London scene, which had an honour to work with some reggae Legends like The Wailers, Max Romeo, Johny Osbourne, Lee Scratch Perry, UB40 and many more. The One Love Orchestra is a band with a look that showcases the diversity and a sound that echoes unifying cultures. Their music creates an atmosphere that evokes an electric yet spiritual vibe that propels the listener to dance. They pride themselves on being able to move their audience on both a physical and emotional level with every performance, and they’re guaranteed to bring an exciting, energetic and inspiring experience to any event stage.

POSITIVE VIBRATION
THREE LITTLE BIRDS
I SHOT THE SHERIFF
RUNNING AWAY
CRAZY BALDHEADS
THE HEATHEN
LIVELY UP YOURSELF
STIR IT UP
ONE DROP
FOREVER LOVING JAH
EXODUS
WAITING IN VAIN
JAMMIN
REDEMPTION SONG
NO WOMAN NO CRY
JAH LIVE
WHO THE CAP FIT
GET UP STAND UP
ONE LOVE
NATURAL MYSTIC
IS THIS LOVE
SOUL REBEL
400 Years
Acoustic Medley
Adam And Eve
Africa Unite
African Herbsman
All Day All Night
All In One
Ambush In The Night
Amen
Baby We've Got A Date (rock It Baby)
Babylon System
Back Out
Bad Card
Bend Down Low
Blackman Redemption
Brain Washing
Brand New Second Hand
Buffalo Soldier
Burnin' And Lootin'
Bus Dem Shut (pyaka)
Caution
Chances Are
Chant Down Babylon
Cheer Up
Coming In From The Cold
Comma Comma
Concrete Jungle
Could You Be Loved
Craven Choke Puppy
Crazy Baldheads
Crisis
Cry To Me
Dewdrops
Do It Twice
Don't Rock The Boat
Donna
Dreamland
Duppy Conqueror
Easy Skanking
Exodus
Forever Loving Jah
Freedom Time
Fussing And Fighting
Get Up, Stand Up
Give Thanks And Praises
Gonna Get You
Good Lovin Feat. Lauren Hill
Guava Jelly
Guiltiness
Hallelujah
Hammer
High Tide Or Low Tide
How Many Times
Hypocrites
I Am Going Home
I Can See Clearly
I Know
I Know A Place
I Made A Mistake
I Shot The Sheriff
I'm Hurting Inside
Iron Lion Zion
Is This Love
It Hurts To Be Alone
Jah Live
Jailhouse
Johnny Was
Judge Not
Jump Nyabinghi
Kaya
Keep On Moving
Kinky Reggae
Let Him Go
Looking Your Big Brown Eyes
Love And Affection
Melow Mood
Midnight Ravers
Misty Morning
Mr Brown
Natty Dread
Night Shift
No More Trouble
No Woman No Cry
One Dub
One Foundation
Positive Vibration
Punky Reggae Party
Put It On
Rainbow Country
Real Situation
Rebel Music (3 O'clock Roadblock)
Redemption Song
Revolution
Ride Natty Ride
Riding High
Rock It Baby
Rocking Steady
Running Away
Satisfy My Soul
She's Gone
Shock Of Mighty
Simmer Down
Small Axe
Smile Jamaica
So Jah Seh
So Much Things To Say
So Much Trouble In The World
Soul Almighty
Soul Rebel
Soul Shakedown Party
Stir It Up
Stop That Train
Sun Is Shining
Survival
Talkin' Blues
Teenager In Love
Thank You Lord
The Heathen
Them Belly Full (but We Hungry)
There She Goes
Trenchtown Rock
Try Me
Turn Your Lights Down Low
Waiting In Vain
Wake Up And Live
Want More
Why Should I
Work
Zion Train
Customer questions

Cuttie Williams is the name of the lead singer. You can see video called Cuttie Williams & One Love Orchestra https://www.youtube.com/watch?v=2V9IAailCyQ

We might charge little bit extra but we understand that event can have some delays.

Yes we can provide iPod service before and between our sets.

We usually need 1 hour for sound check. 2 hours before the performance time. PA provided by client or requested from us and can take up to 2 hours to set up.Once is set up we can provide a free playlist service to help set the atmosphere and get your guests ready for our live performance.

Yes you can, We also can play some other reggae classics.

No. Can be supplied by request.

If a song isn't included in our song list there may still be a chance we already know it. If there is a special song you'd like us to learn we are happy to do this for you. There is an extra fee for this service to take into account rehearsal times etc.

All prices include:PA not included in price
One Love Orchestra

BB
Belinda B
5 years ago

One Love Orchestra was an amazing band - despite of the heavy rain during my party, all my guests had a wonderful time and how much they enjoyed the songs. Marcin and team - many thanks for your professionalism and great performance. highly recommended to all!

SH
Stephen H
4 years ago, for a Private event in London W3

Stephen: I hired these guys for my wife's 50th birthday celebration and the night was a great success. We had all kinds of people there, young and old and the music got everybody up and dancing from start to finish. The band were super professional and charmed the audience right from very first song. All the musicians were masters of their craft and the singers were superb. The sound quality was brilliant throughout. I wouldn't hesitate to recommend the One Love Orchestra, organising the booking was easy, the show was unforgettable and the party goers wanted it to go on all night! In short, they were worth every penny.