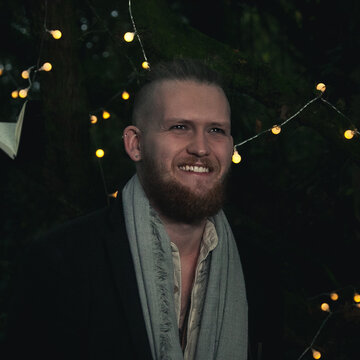 Versatile and engaging jazz pianist and vocalist. Whether you want sumptuous background jazz, or fun and lively covers, I’m the guy for you!
3 of 5 photos
Pianist
London

Ollie is an actor, songwriter and award-nominated musical director from South Yorkshire. Having obtained a BA(Hons) in Music and Drama from the University of Manchester, Ollie went on to study at the Royal Central School of Speech and Drama, graduating with a Distinction from the MA Music Theatre programme. Most recently, Ollie appeared in the internationally acclaimed hit show The Choir of Man as the ‘Pianoman’, and has also been seen in Antic Disposition’s UK Tour of Shakespeare’s Henry V, Sondheim’s Assassins at the Edinburgh Fringe Festival, and starred alongside Sir Michael Caine in the feature film Is Anybody There?. Ollie’s work as a Musical Director earned him a nomination in the 2019 Great British Pantomime Awards for ‘Musical Achievement’, for his work on Sevenoaks Panto Ltd.’s Dick Whittington. He was recently able to put those skills to good use as Music Captain for The Choir of Man. As a singer, Ollie has sung with some of the country’s most revered choirs (inc. NYCC, CBSO Male Chorus, Cambridge’s St John’s Voices), singing at the Royal Albert Hall for the BBC Proms, and as far afield as Cathedrals in Hong Kong and Singapore. His reputation as a jazz pianist earned him a place in big bands and function bands across Manchester, and his compositions have been performed by ensembles across the country. Ollie is currently working on his debut EP, and using the lockdown to release demos of new material.

Afro Blue
Ain’t Misbehaving
Ain't No Sunshine
Alice in Wonderland
All At Sea
All In Love Is Fair
All Of Me
All The Things You Are
Almost Like Being In Love
Angel Of Small Death
Anything Goes
As
Autumn Leaves
Barely Living
Beyond The Sea
Black Coffee
Blame It On My Youth
Blue Bossa
Blue In Green
Blue Moon
Blue Skies
But For Now
Bye Bye Blackbird
Can’t Help Lovin’ Dat Man
Cantaloupe Island
Colder Weather
Come Fly With Me
Come Together
Count On Me
Cry Me A River
Danny Boy
Dead Or Alive
Devil May Care
Do Nothin’ Til You Hear From Me
Don’t Know Why
Don't Stop The Music
Don't You Worry 'Bout A Thing
Donna Lee
Dream A Little Dream Of Me
Embraceable You
Fascinating Rhythm
Fly Me To The Moon
Freddie Freeloader
From This Moment On
Georgia On My Mind
The Girl From Ipanema
Good Morning Heartache
Green Dolphin Street
Have You Met Miss Jones?
How High The Moon
I Can’t Get Started
I Get A Kick Out Of You
I Got Rhythm
I'm All Over It
I’m Glad There Is You
If I Loved You
If I Ruled The World
If I Were A Bell
In The Wee Small Hours Of The Morning
It Ain’t Necessarily So
It Don't Matter
It Don’t Mean A Thing
I Think, I Love
It’s Only A Paper Moon
I’ve Got The World On A String
I’ve Got You Under My Skin
Just Friends
Just One Of Those Things
L-O-V-E
La Vie En Rose
The Lady Is A Tramp
Let’s Do It (Let’s Fall In Love)
Love Ain't Gonna Let You Down
Love For Sale
Mac The Knife
Make Someone Happy
Minnie The Moocher
Misty
Moon River
My Favourite Things
My Funny Valentine
New Shoes
Night And Day
Not While I'm Around
Old Devil Moon
One Note Samba
Over The Rainbow
Pure Imagination
Send In The Clowns
Side Winder
Sittin' On The Dock Of The Bay
Someday My Prince Will Come
Stardust
Straight No Chaser
Sunny Afternoon
Take Five
Take Me To Church
Take The ‘A’ Train
They Can’t Take That Away From Me
Turn On The Lights
Wait My Turn
Waltz For Debby
We'll Gather Lilacs
What A Difference A Day Made
When I Fall In Love
When I Get Famous
When You Worry
Wind Cries Mary
World Stands Still
Yesterday
You and I
You Are The Sunshine Of My Love
You're The Voice
You Stepped Out Of A Dream
Customer questions

I am always happy to stay flexible as far as I can. I understand very well how things can change, but just ask that you give me as much notice as you can.

Absolutely, I can offer the perfect playlist for you for free. If you'd like to use my equipment after the final set until the venue closes, I can provide this for an additional £125.

I would usually ask for at least 1 to 1.5 hours of time to set up before a set. As soon as my PA is set up I can provide a free playlist service to help set the atmosphere ahead of my first set!

Of course - provided the piano is in tune and in good condition!

I'm always happy to take requests into consideration, but do prefer to craft my set lists ahead of time, based on my experience of what works best. However, I am always happy to discuss with you in order to find something that fits exactly what you're looking for!

Absolutely, I have several keyboards which I can bring, depending on what's appropriate for the set.

If there's a song you'd like which isn't in my set list, there's a good chance I already know it, so do ask! If there's something you'd really like which I don't know, I am more than happy to learn something new, for which there is a small fee of £30 to cover the time it would take to learn and arrange the new song.

Standard Prices
All prices include:PA equipment, keyboard, microphone, stand.
NEW!Virtual services
Personalised Music Message
Book me to create a unique music video for you to send to a friend as a gift. This could be a birthday message, first dance song for a wedding anniversary, or just your friend's favourite song to cheer them up.
£15
Bespoke music video
I'll produce a unique music video with professional recording equipment. I can customise the video with your own branding and lyrics!
£20
Zoom bomb
I'll jump into your Zoom call and surprise your friends and colleagues with a unique song!
£20
Virtual Zoom Gig
I can offer you a virtual service online, a 45 minute set of all your favourite singalongs and Christmas classics, tailored to your requirements - I can even do 'Happy Birthday', if that's your occasion!
£100

I needed a quick backing track and notebash for a song and Ollie got it all done in such a short time and with such a great quality that I definitely would recommend him if you need any tracks done. Not only was it done exactly to my needs, but it just sounds amazing (not one of those tinny or simple backing tracks you can get from other sources). So if you need something you could use for a professional standard, then Ollie definitely is a great option!

Thank you so much for the backing tracks! They were of such good quality considering I gave you no time at all and they are perfect to the cuts I gave! Jared Leathwood

Verified
Sasha B, 1 month ago

Ollie was a pleasure to work with! I needed recorded acoustic versions of my original tracks for a last minute gig and I was amazed by how quickly Ollie learnt the material and recorded it for me. He made everything easy and I will definitely work with Ollie again. Highly recommended! Sasha Brown -Singer/Saxophonist