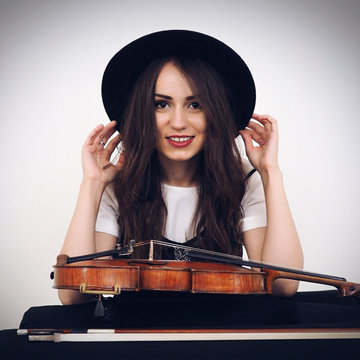 Check availability and get a free quote now - no commitment to book
From£180
Watch & Listen
About Nataly
Home page
Nataly Corolscaia
Like Nataly?
Watch & Listen
1-3 of 9 videos

She started to play violin at the age of 7, having her first lessons at the Musical Lyceum “ Sergei Rachmaninov” in Chisinau, Republic of Moldova. In that time she took part at numerous concerts and music festivals like a soloist, quartet and orchestra member. After successfully graduating, Natalia obtained a full scholarship at the Academy of Music, Theatre and Fine Arts, “Gavriil Musicescu”, in Chisinau, in the class of Angela Molodojan, Maestro in Arts of the Republic of Moldova. She graduated for a Licentiate Diploma in Higher Education Music. In that period Natalia started working in the National Opera and Ballet Theatre, as a violinist in the orchestra. She managed to perform with the orchestra in Germany, Spain, France, Belgium, Switzerland. In 2016, Natalia was offered a full scholarship at the University of Chichester starting her Masters Degree in Music Performance, in the class of Oxana Dodon. In a short period of time, she took part at a masterclass with Zoltan Tacacz (principal first violin at the Radio Symphony Orchestra of Helsinki) and James Dickenson (Leader of the Villiers Quartet), and Emilian Dascal (solo viola at Sinfonierorchester St. Gallen). Also she had numerous performances with the University of Chichester orchestras, like “Carousel” musical and “Cinderella”, as a leader, and a collaboration with the Hannover Band. Natalia had the opportunity to take part, with the University of Chichester Chamber Orchestra, at the recordings that took place at The Abbey Road Studios.